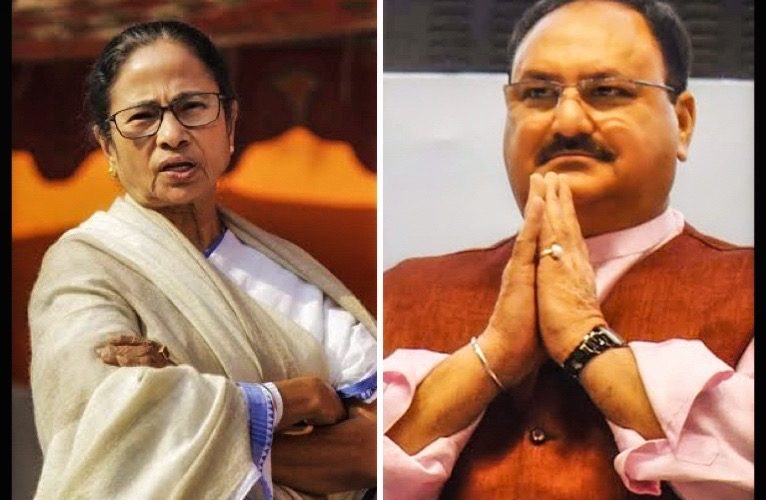 KOLKATA 10 DEC: Has the TMC taken a policy decision to disrupt all BJP rallies , meetings and processions ahead of the Assembly elections just four months away. As the events have been unfolding in the last couple of weeks all indications are supportive of the conjecture . The recent rally at Diamond Harbour by BJP leader shows how TMC leaders differ from one another in their statement while justifying the reason for the disruption.

On Thursday, BJP president, JP Nadda’s convoy was attacked by a rampaging mob at Diamond Harbour. Mainly, with bricks and stones pelted at the BJP president’s car. Also, few other senior leaders like Kailash Vijaywargiya, Rahul Sinha, Anupam Hazra, Mukul Roy did receive some minor injuries in the attack.

Vijaywargiya and other senior leaders received minor injuries. Just ahead of the Assembly elections four months away.

Didi accuses BJP leaders of staging attack on own rally

According to chief minister Mamata Banerjee, nothing happened at Sirakol in (DiamondHarbour). Didi cleared the air that the saffron party leaders have not informed the state government to give any more security to them. Mostly, they rely on central security forces. So, Mamata asked where were the central security forces at the time of the incident? Further, she asked about what prompted them to take 50 cars during a rally? She said it could have caused a further commotion and chaos in itself. Even, Mamata did question about how so many videos were made and if this entire incident was just planned in advance? In addition, Didi even asked, “They has no other work. At times, Home Minister is here, other times its Chaddha, Nadda, Fadda, Bhaddha is here, When they’ve no audience, they call their workers for Nautanki.” In a way, she hinted how the saffron party is bringing in ‘outsiders’ just before the elections next year.

Also, Banerjee said that the police has been asked to investigate into the matter. And she made it clear that lies will not be tolerated.

In addition, Banerjee said, “When I went to Delhi too, BJP leaders gathered at my government quarter where I used to stay. Why did they send people to gherao my quarter?”

Besides, Abhishekh Banerjee, another TMC leader also claimed that people are dissatisfied with the BJP government even at the Center. So, that is why they have pelted stones at Nadda’s convoy during his rally.

Meanwhile, Saugata Roy, TMC MP, said, “Why did Nadda visit Abhisekh Banerjee’s constituency. We need to investigate the matter. In fact, find out who pelted stones at JP Nadda’s convoy.“

However, Nadda said, “Just when I was on my way, to Diamond Harbour to conduct a rally, my car was being chased. And TMC workers pelted stones at my car. Some of our leaders have received minor injuries. I have informed the matter to the Union Home Minister. Soon, a probe will be conducted.”

Eventually, the Union defence minister Rajnath Singh did speak with Nadda over the phone.

Ahead of the Assembly election in 2021, while BJP has tried to raise the issue of lawlessness anarchy and corruption in the state, TMC  has tried to flaunt its card of Bengali Asmita ( Bengali pride ). Also, brought out development as another plank to win the hearts of the voters.

Further, Nadda said that the TMC government is only concerned about filling their own pockets. He also alleged that 70 per cent of the public fund goes into fill TMC coffers. Especially, from the various government schemes. Instead of Ma Mati Manush slogan, TMC is only all about corruption, stealing public money and mismanagement of the entire administration.

Even, Nadda alleged that Mamata knows nothing about the administration.

Reacting to chief minister MamataBanerjee’s accusation of staging drama and central  leaders protected by central security ,Nadda said,”Central forces protect the subject.they are not assigned to stop stone-pelters,or restrain people from gathering sticks/stones/bottles.It was the work  of state police  got to know what kind of name-calling, definition about me / my name came from Mamata ji. I would say, Mamata Ji , this speaks of your culture. I know, this is not Tagore’s Bengal’s culture, this is not Bengal’s language

On the issue of whether BJP is going for a Presidents rule in Bengal Nadda said ,” We will go through democratic means to get rid of Mamata Banerjee. We believe in democracy and people of Bengal are ready to wipe of TMC from Bengal .”

According to Nadda, the intolerance of Mamata Banerjee came to the forefront now. It is harmful to Indian democracy.

On Thursday , eight BJP workers are admitted to the hospital post the incident. Notably, Kailash Vijaywargiya suffered a fracture. While some senior leaders did sustain injuries. The administration has crumbled down. The impact of the bulletproof vehicle has also been seen now.