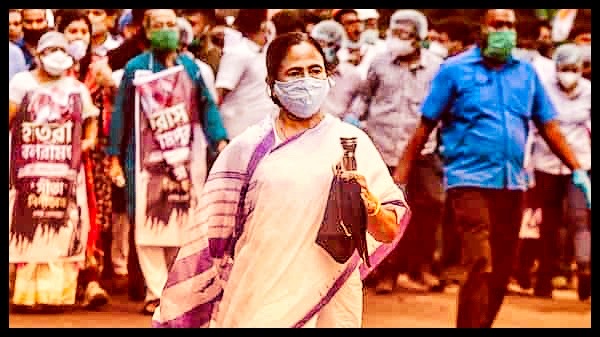 KOLKATA 3 OCT:  Chief minister Mamata Banerjee wants to use  the Hathras incident to serve twin purposes which was evident on Saturday when she took to the streets to lead a Padyatra from Birla Planetarium to Gandhi Murti in Esplanade in Central Kolkata against police atrocities and alleged misrule of Yogi Adityanath government, following the Hathras gangrape.

She gears up to begin her padayatra on Saturday to raise her voice against the alleged gang rape, death and the late-night funeral of a 19-year-old Dalit woman in Hathras, Uttar Pradesh.

Mamata’s first aim is to thwart the BJP government in 2021 Assembly election in Bengal and without wasting anytime she has urged all her party members to organise rallies and Padayatras at every block of the state demanding justice for the Hathras victim and her family.

Banerjee’s second purpose seems to be another attempt at wrestling for a place of prominence in national politics. She has already rung the battle cry by launching this recent attack on the Yogi Adityanath government. This is not to raise her voice against the alleged mis-governance but also for being harsh on Hindus for prohibiting Durga Puja celebrations this year citing the pandemic issues.

Banerjee said, “BJP government has always criticised me. They claimed that in Bengal I did not allow Durga Puja, Saraswati Puja. I would ask CM, Yogi Adityanath why he is not allowing Durga Puja. Is he not hurting the sentiments of the common people?”

In an interesting twist of events, Mamata in her speech on Saturday, started by addressing the public in Hindi.

“My mind wants to go to Hathras in U.P to speak with the victim’s family members. I have sent my MP’s to visit Hathras. But they were not allowed to enter the victim’s house and speak with their relatives. Even the police burnt the body in the dead of the night. Although family members of the victim urged not to burn her body that night. They were manhandled. A police complaint has been lodged. You (BJP) government can stop us for one day and not allow media and Opposition parties to visit the victim’s house. But you cannot stop us every day,” she dared the BJP government.

Mamata Banerjee believes that the administration wanted to cover up the ugly truth behind the Hathras incident. She claims that to be the sole reason for barring media and Opposition parties from visiting the house of the victim yesterday.

Didi said, “I called the victim’s family members. But they (police) took the mobile phone from them. They are trying to hide the truth. And it’s a shame that they have tried to manipulate the victim’s family members to cover up for their mistake. They have imposed Section 144 in Delhi. In Bengal, we never snatch away mobile phones from anyone. Individual’s right has been compromised with here.”

Meanwhile, a TMC delegation led by Derek O Brien went to Hathras to meet with the family members of the victim’s families on Friday. They were not allowed by the U.P police to enter the victim’s house. Besides, they were manhandled by the police as well.

According to Banerjee, there is no real democracy in the country now. She believes that the BJP government is following a ‘one party-one nation-and-one idea’.

Banerjee urged her party leaders to organise rallies in various blocks on this issue before the Durga Puja.

“When Tapasi Mallick was burnt and murdered, I went to Singur and held a hunger strike for 28 days. We will protest in the streets and we will fight for justice. We will all take the torch in our hand. And will light it as a mark of protest,” roared Banerjee.

Political analysts think that the Hathras incident in Uttar Pradesh has led BJP to a back foot for now. This is especially when the Yogi administration failed to arrest the culprit in the wake of such a wide-spread protest across the entire nation.

Imankalyan Lahiri a senior political analysts and Professor of International Relations Jadavpur University said “The Hathras incident in U.P has given TMC oxygen. While BJP stands at the back foot. And ahead of the Assembly elections in Bengal, this issue can really put BJP in a tight spot,”

CPI(M) Congress went to the streets to protest against Hathras

In Bengal CPI(M) and Congress, both took to the streets in Kolkata and protested against the brutal gang rape at Hathras. Both the political parties demanded swift and prompt action against the accused.

Interestingly, in Bengal, both Congress and CPI(M), joined hands together and started their protest rally identifying themselves as one conglomerate party. This seems to be bringing in some major unity when it comes to seeking votes for the upcoming Assembly elections.

According to several BJP leaders, Chief Minister Mamata Banerjee has herself failed to improve the law and order situation in her own state. They feel she should work on improving the situation first at home and then begin to comment on Hathras and the U.P government.

Dilip Ghosh, the state BJP president, said, “In Bengal, police are puppets. They do not make a complaint when we file at various police stations in the state. It’s a shame for Bengal. She should improve the law and order situation in her own state and then she should comment elsewhere.”