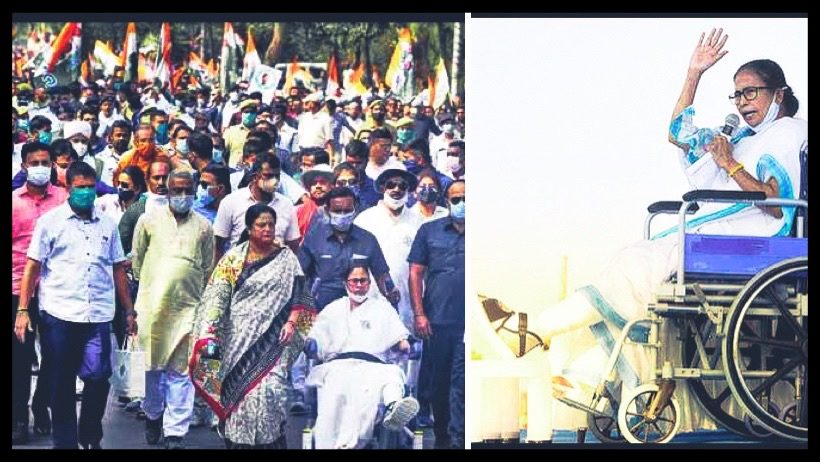 KOLKATA 15 MARCH: After Mamata Banerjee  suffered an accident in Nandigram on Wednesday, her leg in a cast and sitting in a wheelchair, chief minister Mamata Banerjee has not held herself back from not heading the party’s election campaign. Now, Trinamool Congress has changed its slogan from Khela Hobe (Game on)to Bhanga Paye Khela Hobe (Game on, broken leg and all).

In fact, in various parts of West Bengal, posters have been pasted and pinned by the TMC workers that say the game is still on, even with the injured leg.

Mainly, the posters have led to an immense war of words between both the major political parties in the state. While the Bharatiya Janata Party claims that they are also ready for the game, TMC leaders continue to claim that now it would be difficult for BJP to fade away the voice of their leader. This is they claim despite an attack on her life, recently in Nandigram where she had visited on Wednesday to file her nomination.

On Monday, during her rally in a wheelchair at both Jhalda and Balarampur in Purulia, Banerjee said, “No conspiracy can stop me from campaigning ahead of the Assembly polls in the state and I will continue to fight against the BJP.”

While addressing a rally at Purulia, Banerjee also said, ”I will be alright within a few days. Although, I have suffered pain in my left leg. But I feel that the common people’s pain is more than what I have suffered. I will again come to Purulia after I am able to stand back on my own feet. I will see whether BJP’s legs can move freely in Bengal’s soil.”

Criticising Modi, Banerjee said, “The Prime Minister has failed to run the country and he is acting like a dictator. He should first concentrate on Delhi as it is difficult to conquer Bengal.”

According to Banerjee, BJP is trying to woo the voters with their money power as the border of Ayodhya hills is yet to be closed and despite informing the matter to EC, they are yet to take any action in this regard.

Banerjee added,  “I have received information that BJP leaders including the railway minister had held a meeting wherein they have decided that a huge influx of BJP leaders from other states will be deployed to cast false votes. I urge the women voters of the constituency to give a befitting reply if they find any outsiders in their locality trying to cast their false votes.”

While the EC report claimed that it was an accident after receiving a police report, the authorities ruled out any angle of an attack on her. The EC also transferred the director of security. Though, Gyanwant Singh was appointed by EC in place of Virendra. The poll panel also transferred the DM, SP of Nandigram after the incident.

The Union Home Minister Amit Shah, who is campaigning in West Bengal currently, canceled his first rally. In fact, he addressed the public via video conference instead. In his speech, he blamed the last-minute cancellation on a technical snag in his chopper. Though, Mamata-led Trinamool Congress claimed the ‘cancellation’ or the ‘snag’ as only an actual case of poor turnout at his rally.

Soon after, the Trinamool Congress also posted images of a thin crowd and empty chairs from the Jhargram rally site and also claimed that this was the real reason behind the last-minute change in plans by the BJP leadership.

The Union minister was slated to visit Jhargram, again, an important rural Bengal constituency. Mostly, to launch a Yatra to pay tribute to the great freedom fighter Birsa Munda and others who fought the Britishers. Initially, the party had mentioned a massive rally in Jhargram. Currently, Amit Shah is on a two-day visit to Bengal.

Just a day after the BJP declared its list of 36 candidates for the upcoming Assembly election in West Bengal, a series of violent protests erupted at various places of the state, involving dissidents of the party who were denied tickets.

The chain of protests took such an angry turn that there was a violent protest in front of the party-state headquarters at Hastings. Slogans were raised against Mukul Roy, party vice president when he was entering the building.  Also, there was a scuffle between the police and the BJP supporters here after the police did not allow them to break the barricade and enter the BJP Hastings office.

Further, protests also broke at Chinsurah and Singur in Hooghly where Locket Chatterjee, MP of BJP, and Rabindranath Bhattacharya, who recently joined from TMC to BJP received tickets.

According to the BJP dissidents, those who are capable and served the party for several years were denied tickets, while the turncoats have been given tickets immediately. In addition, the BJP workers heckled Arvind Menon, Shiv Prakash and few other senior leaders.

“We protest against the decision of the BJP leadership to choose the turncoats as candidates. But several leaders who worked tirelessly for the party were denied tickets. We demand a change in the candidate list,” said a BJP supporter.

Also, the BJP supporters burnt tyres and blocked roads in several parts of the state as a mark of protest against the decision of the BJP leadership.