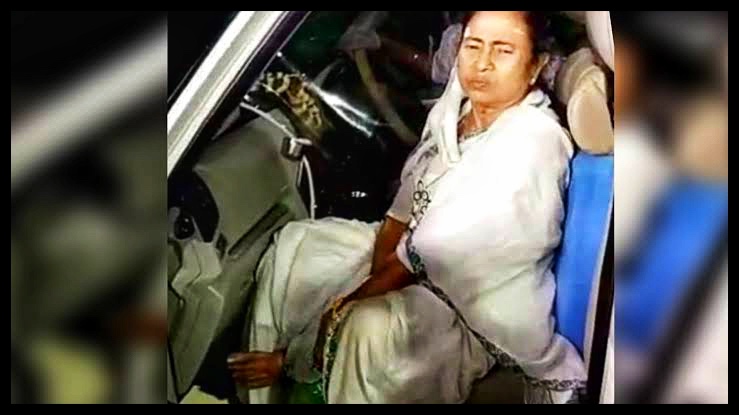 KOLKATA 10 MARCH: On Tuesday, West Bengal Chief Minister and Trinamool Congress supremo Mamata Banerjee alleged that she was injured and hurt her left leg during the election campaign in Nandigram. According to Banerjee, she was worshipping at the Birulia temple in Nandigram. Then, she went to her car and it was then that 4-5 persons manhandled her.

Banerjee alleged that there was inadequate police arrangement and the district superintendent of police was absent from the spot.

Talking to the media persons, Banerjee narrated the incident, “I was going back to Kolkata. I was meeting the public. There were no policemen. 4-5 people came. I was standing beside my car. 4-5 persons deliberately tried to push me inside the car and tried to close the door. I have got injuries in my leg and feet. I am in a lot of pain. I am going back to Kolkata.”

Moreover, the TMC chief said that her leg was swollen and she also had a slight temperature. Also, she claimed that she also had pain in her chest as well. In addition, Didi alleged that there is a ‘conspiracy’ involved in this as there were no policemen present at the spot. Now, the CM’s visit has been cut short on Wednesday night as she is returning to Kolkata. Banerjee will be taken to SSKM Hospital for further treatment. A seven member medical board has has been formed to look after Banerjee’s health.

Later in the night she was taken to Bangur institute of Neurology for conducting an MRI.

Abhisekh Banerjee, TMC leader said nephew of Mamata Banerjee said “We are waiting for the medical reports. There is a grave injury. She has suffered a crack. She has gone for MRI”

Questions arose on how and why the district superintendent police and other police officers were not present at the spot. Despite the fact that the Bengal chief minister Mamata Banerjee enjoys ‘Z plus’ security.

Soon after the incident, Trinamool Congress leaders complained to the Election Commission. Also, they demanded an impartial investigation in this regard.

What other political parties say

According to the BJP leaders, although the incident is unfortunate, they also demanded that there is a need for an investigation in this regard.

Arjun Singh, BJP leader, mockingly said, ”Who can push chief minister Mamata Banerjee. Banerjee has a history of creating stunts. It can be a stunt of Banerjee as she is capable of such theatrics. She is trying to gain sympathy. And  if anybody seriously injured her, then there is a need for an investigation.”

Adhir Ranjan Chowdhury, a Congress leader, said, “Banerjee is very professional in creating sympathy out of a small injury. I feel this is her political stunt to create sympathy.”

It is worth mentioning the almost fatal blow that Mamata had endured on August 16, 1990. Then a Youth Congress leader Mamata Banerjee had organised several pickets and rallies. The party was protesting against deaths due to unadulterated edible oil in the city. Around 11 am, she was leading a rally near the Hazra crossing when she was attacked by CPM cadres. Mainly, Lalu Alam, a former Congress activist, and then-CPM Kolkata district member were accused of rendering a near-fatal blow on Banerjee’s head, leaving her with a fractured skull. Then, Banerjee, bleeding profusely, was rushed first to SSKM Hospital, too.

Meanwhile, Banerjee is supposedly in her elemental best whenever she is pitted in the role of Opposition. It may be recalled how the 2006 hunger strike against the Buddhadeb Bhattacharya government allowing Tata Nano’s production in Singur actually catapulted Mamata to her political stardom. She was opposing the setting up of the factory here and a Special Economic Zone in Singur. Also, another ‘dharna’ in the year 2008 also made sure that both Tata and the Left Front were kicked out of the state for good. Though, Didi’s dharnas and the attacks on her by various political party members go back even further.

In 1993, when a determined Mamata marched up to the Writers’ Building to protest outside the then-CM Jyoti Basu’s office against the alleged rape of a mute girl by a CPM leader. Back then too, she was pulled out by her hair and thrown on the streets. Especially, after the CM refused to meet her.