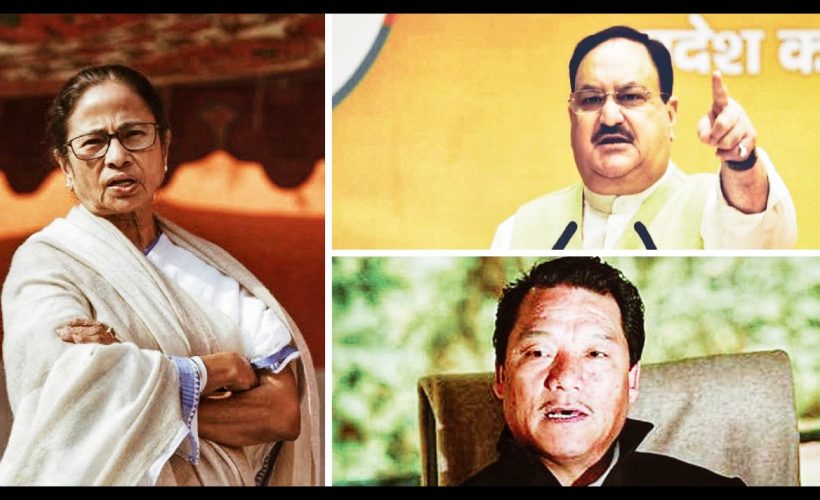 DARJEELING 14 APRIL: Facing a triangular contest with Gorkha Janmukti Morcha GJMM 1, GJMM 2, and the Bharatiya Janata Party pitching their candidates, it is gearing up for one fierce battle between the three major political parties.Â What is interesting to observe here is that in 2016, it was the BJP that fought against an undivided GJMM, but this time GJMM has been divided into two factions. Also, whether it will give the BJP an edge over the rest or not, is yet to be seen on the counting day, May 2.

This year, three seats in the hills, Darjeeling, Kalimpong, and Kurseong, apart from the 34 constituencies are going for the polls on the fifth phase. Also, the change of camp of Bimal Gurung from the BJP to the Trinamool Congress has even changed many equations.Â Moreover, local residents are of the opinion that they have seen the administration run under the GJMM by Bimal Gurung now GJM (1) and they have also witnessed the administration run by Binoy Tamang GJM (2) faction.

In addition, they are not at all hopeful of a better future from the two. Gurung’s switch over to TMC last October was initially seen as a jolt to the BJP, but it gave BJP to build in the hills with the help of a section of leaders of Gorkha National Liberation Front GNLF.

The hillpolitics has traditionally been dominated by sentiments against the state government. Even though, Mamata Banerjee managed to make significant inroads with her development projects by 2016, police atrocities during the 2017 statehood agitation turned a majority of the hill population against her.

Aloke Thulung, a member of GJM (2), said,”Although BJP has tried to dent on the GJM vote, it is hard for them to cut the ice as the Gorkhas are united. Despite there is a division in the GJM, we are confident of getting majority votes from three seats of the hills. Implementation of NRC as promised by BJP will provide a negative impact on the mind of the Gorkhas”.

Noel Lama, a resident of Darjeeling town, said, “The Gorkhas are perplexed. Although they want a change in the hills, they are not fully convinced of BJP’s  promises. So, it is a tough fight for three parties in the hills”.

Riding on this anti-TMC sentiment that Gurung managed to retain his support base, despite remaining in hiding from August 2017 to October 2020.

According to BJP leaders, local people basically seem to be frustrated with TMC and after Gurung joined TMC in October last year, many supporters and leaders left Gurung and joined forces with the saffron party. Also, the BJP promised the inclusion of 11 tribes from the hills in the list of Scheduled Tribes, a move that would make the areas under GTA into a tribal majority. Further, this is all set to pave the way towards GNLFâ€™s demand for sixth schedule status for the hills.

The sixth schedule of the constitution has provisions for the creation of autonomous districts and autonomous regions in tribal areas of Assam, Meghalaya, Tripura, and Mizoram.

Subha Pradhan, a BJP candidate of Kalimpong, said,”Local people are frustrated with TMC government, and the anti-TMC wave will lead us to victory. Although both GJM 1 and GJM 2 led by the Binoy Tamang faction are trying to mislead people by claiming that they will have the same faith as that of Gorkhas of Assam, it was not true. I will leave politics if anyone could provide proof that one lakh Gorkhas are robbed of citizenship rights.”

In addition, both GJM (1) and GJM (2) are carrying out an intense campaign against the BJP on the National Register of Citizens (NRC) citing how more than 1 lakh Gorkhas living in Assam had been kept off the Assam NRC. Also, lambasting the BJP for having called for a similar exercise in Bengal.

According to Binoy Tamang, he claimed that BJP is anti-Gorkha. They are calling for NRC in Bengal but most of the people in the hills, including the tea garden residents, do not have proper papers,then Gorkhas will be in trouble, and thus both the GJM factions  brought in Gorkha leaders from Assam to elaborate how NRC ruined the lives of the Gorkhas in Assam. It needs to be seen whether Union Home Minister Amit Shaha’s rally will have any effect on the vote bank in the three seats in the hills or not.
Impact of Past Voting in DarjeelingIt may be worth mentioning that the GJM won all three seats in the hills with massive margins in 2011 and 2016.In 2016, the GJM defeated its nearest rival, TMC, by 50,000 votes in Darjeeling and 33,000 votes in Kurseong.

GJM’s winning margin was least in Kalimpong at 11,000 votes, as the party was fighting rebel GJM leader and incumbent MLA Harka Bahadur Chhetri who launched his own party ahead of the elections.In the 2019 Darjeeling assembly by-election, GNLF Niraj Zimba, contesting on a BJP ticket and with GJM (1)’s  backing, defeated GJM(2)’s Binay Tamang by over 46,000 votes.