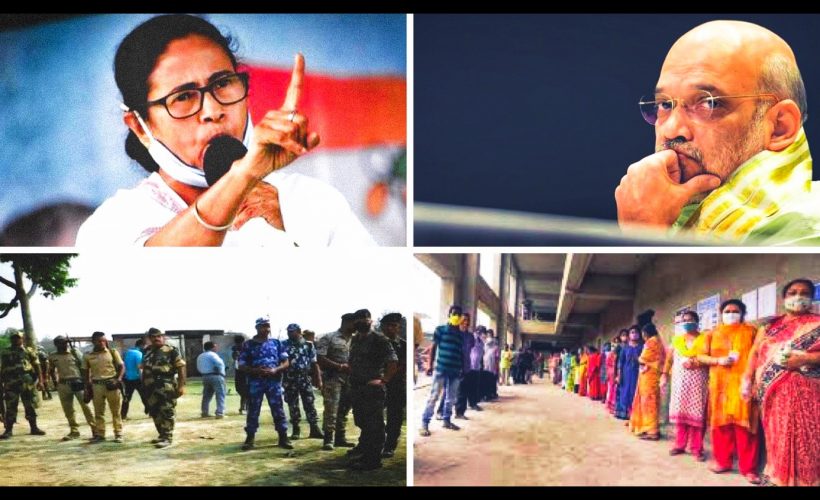 KOLKATA 10 APRIL:  At least five people have died in Coochbehar in two separate incidents on the fourth phase polls on Saturday. This led to the intensifying of the blame game between the Trinamool Congress and the Bharatiya Janata Party.

In particular, one incident took place when the Central Industrial Security Force (CISF) opened fire. Purportedly, after coming under attack in the Sitalkuchi assembly constituency in Coochbehar district that claimed four lives. The CISF fired live bullets on an unruly mob here.

Meanwhile, TMC accused that the CISF jawans resorted to firing at their party supporters without any actual provocation.

In another incident also in the same constituency, a first-time voter was killed. Earlier in the day, a young BJP supporter Ananda Burman was shot dead in the area. Allegedly, when Trinamool Congress supporters opened fire at voters who were in a queue outside a polling booth.

Notably, a 76.16 per cent voter turnout was recorded by the Election Commission (EC) till 5 pm in the 44 seats where the polling was held.

Moreover, senior officials of the Election Commission said that the report that has reached the Commission suggests that the central forces had to open fire only in self-defense. The polling was stopped in booth number 126.

Now, both these incidents have sparked a massive controversy between the TMC and the BJP. While Prime Minister Narendra Modi blamed chief minister Mamata Banerjee for instigating people against central forces, Banerjee demanded the resignation of home minister Amit Shah who she alleged was conspiring to kill people. Also, the CISF has issued a statement informing about the series of events that led to the mass violence at the Sitalkuchi assembly constituency in Mathabhanga block in Cooch Behar.

According to the CISF, on Saturday, around 9:35 am, near booth No 126, a Quick Reaction Team (QRT) of CISF headed by Coy Commander Inspector Sunil Kumar was attacked by a mob. Mainly, an unruly crowd of around 50-60 miscreants when they were on their official patrolling around the area along with local police representative to clear the route for the voters. Those 50-60 unidentified goons were allegedly preventing voters from reaching the polling booths.

Even, a scuffle took place where a child fell down and miscreants started damaging the vehicle of QRT. Also, attacked the QRT personnel. QRT reacted in self-defense and fired six rounds in the air to disperse the mob. Deepak Kumar, DC Adhoc Comdt of 567 CISF reached the spot and had to pacify the mob.

After an hour, another group of a mob (approximately 150) joined in and approached booth No 186, and started manhandling the polling staff on duty at the booth. At first, they started beating the Home Guard and an Asha worker who was present on duty at the booth. Then, a CISF booth Comdr tried to pacify the rowdy crowd but the angry mob entered the polling booth. Also, they beat up the other polling staff on duty.

Later, a few miscreants tried to snatch the weapons from the deployed  CISF personnel there. As a result, the jawans fired two rounds in the air. But, the mob did not pay much heed to the warning. In the meantime, QRT of CISF and police also reached the spot. The mob further started advancing aggressively towards CISF personnel, therefore, sensing imminent danger to their life. Soon, they fired seven more rounds towards the advancing mob. While the above incident was going on, more police parties arrived at the booth. In addition, it is reported that in self-defense, they have also fired few rounds. As a result, few goons were injured and immediately the mob dispersed. More police personnel reached the spot later. It was reported that five or six lawbreakers sustained fatal injuries. Finally, they succumbed to their injuries.

Voting in other constituencies

Kasba, Chinsurah, Bhangor in South 24 Parganas. Reportedly, there was a scuffle between a BJP candidate Dr Indranil Khan and the Central forces at a booth in Kasba. This happened when Khan approached to enter a booth. Only after he received information that TMC goons were trying to forcibly enter a booth in Kasba for booth capturing.

In Chinsurah, allegations have been leveled against Locket Chatterjee, another BJP candidate. Mostly, for not allowing the ASHA workers to enter the booth for conducting sanitisation. Chatterjee claimed that they did not possess valid documents that EC-appointed health workers were required to produce. So, she asked them to leave the booth. Later, the health workers staged a protest outside the booth claiming that although they had valid documents from EC, they were not allowed by Chatterjee to enter the booth.

In Tollygunge, BJP leader, Babul Supriyo caught a woman who was allegedly witnessed voting for other persons. She did not even possess a valid voter card, apparently.

However, Banerjee is scheduled to pay a visit to Sitalkuchi tomorrow. After the reports of such violence, Mamata said, “It was the PM Narendra Modi’s responsibility to meet the family members of the deceased. Isn’t he ashamed of such an incident? Instead, he is giving a clean chit. It’s a matter of shame. I condemn his attitude, strongly.”