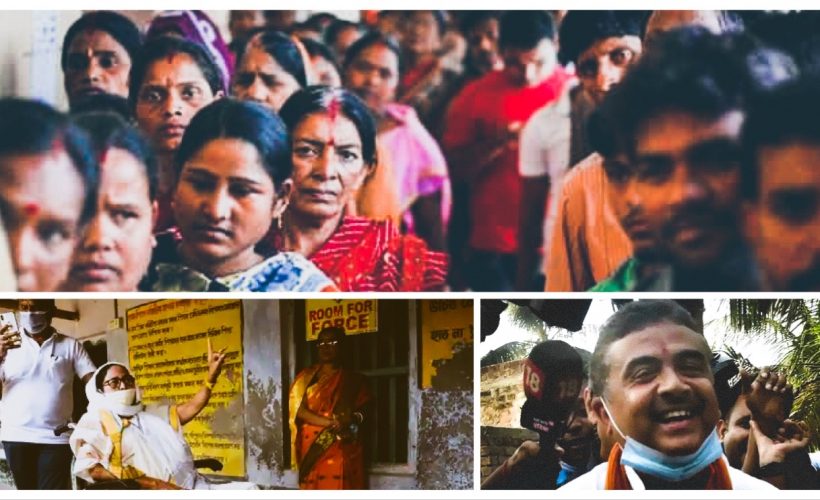 KOLKATA 1 APRIL: High-pitched battles between Trinamool Congress and the Bharatiya Janata Party, ransacking of vehicles of the candidates, allegations of widespread booth capturing and rigging, and above all the chief minister Mamata Banerjee’s staging a dharna at booth number seven in Boyal village and seeking help from Governor Jagdeep Dhankar-it all marked the electoral battle Royale in Nandigram today.

It is worth mentioning that here the chief minister Mamata Banerjee is engaged in a fierce battle with her former protege Suvendu Adhikari.

In fact, Mamata reported the whole incident to the Election Commission and also sought their intervention. Interestingly, she also called Governor Dhankar and sought his mediation.

After, spending around two intense hours at booth number seven in Boyal, Banerjee, said, “I am confident of winning from Nandigram, but I am worried about democracy.”

According to Banerjee, they were receiving complaints of some people being denied the right to vote. “Certain BJP candidate has been indulging in goondaism since last night. People were threatened, including our leader Abu Taher,” added Mamata. Reportedly, the TMC filed 63 complaints regarding similar activities.

Moreover, the chief minister reached Boyal at around 1:40 pm after the report doing the rounds that a TMC polling agent was denied entry into a booth.

While Mamata’s rival from the BJP, Suvendu Adhikari exuded confidence in winning the seat, the TMC supremo has accused Union Home Minister Amit Shah of controlling the CRPF. Also, motivating them to work in favour of the saffron party.

“I won’t blame the CRPF and police. The BJP has brought goons from outside the state. This is the unfortunate part. I feel sorry for the Election Commission for their silence. They are one-sidedly supporting the BJP candidate,” she added.

Visiting Boyal after Mamata’s departure, Suvendu said with a smile, “Begum is not going to win here. She has lost the election. Bikash will flourish.”

“Didi, are you filing your nomination from another seat?” Modi added, taking a swipe at Mamata.

However, senior Trinamool Congress leaders confirmed that Mamata won’t be fighting from any other seat as she is confident of winning in Nandigram.

According to Adhikari, they will win the 17-gram panchayats in Nandigram, and the way a chief minister is staying at a booth in Nandigram to monitor the voting process, merely shows that she has already lost the game.

It may be mentioned that Nandigram has seen a high polling rate in elections since 2006 Assembly polls. Although TMC historically has an edge in Nandigram sine 2006, it needs to be seen who is the architect behind the entire process . Is it Adhikari family or Banerjee.

Data shows the Trinamool Congress has been enjoying massive majority in this constituency since the 2009 Lok Sabha election. It received good share of votes  even in the 2006 assembly election, which was swept by the Left.

Sensing the Pulse of Locals in Nandigram

According to local TMC workers, although there was tension in several places during the day and barring a few stray incidents, voting was overall peaceful in Nandigram.

A section of TMC leaders feels that the fight in Nandigram is quite personal. The entire Nandigram is divided between Didi and Dada, now.

Sources in Nandigram said that BJP is confident of winning Haripur, Gokul Nagar, and Bhekutia in Nandigram I, and TMC will get a lead at number 3, Kanimari, 7 number Santaabad, 9 number Kalicharnapur, and 4 number Daudpur.

Barring a few stray incidents, polling was peaceful in other places. In Kespur, a media vehicle was torched and a photographer, a driver, and a reporter received injuries. In Sabang and Debra too, incidents of widespread booth capturing, denying polling agents of TMC to sit, was reported.

This time around, South 24 Parganas is voting in the second, third and fourth phases on 1, 6 and 10 April respectively, with Diamond Harbour, the parliamentary constituency of Mamata’s nephew Abhishek Banerjee, set to vote in the third phase.