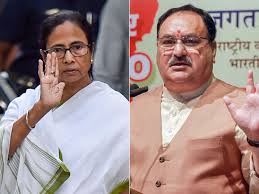 KOLKATA 15 OCT: BJP youth wing’s West Bengal president Soumitra Kha in his statement claims that the coloured water used by the police to disperse the crowd during the Bharatiya Yuva Morcha rally on October 8, contained COVID-19 virus. This has sparked a huge controversy, especially among doctors, who claim that it is yet to be proven whether the water contained Coronavirus or not.

Kha demands an impartial investigation on this matter. He also claimed he had proof that has encouraged him to comment on this statement.

Moreover, Kha continued to claim that many virus-infected swab samples were left at Beleghata ID Hospital and the same were mixed with the same water that was used to disperse the mob last week.

This has given way to the start of controversy inside the Opposition political parties, now. The political parties are now blaming the saffron party for unnecessarily trying to portray an unscientific picture in front of the masses.

Firhad Hakim, urban development minister, said, “We cannot respond to any such unscientific comments made by any BJP leader. There  is no  conclusive evidence to prove that the coloured water contained COVID-19 virus.”

According to several TMC leaders, BJP had also used coloured water to disperse an angry mob at a protest in Delhi in 2013.

Sujan Chakraborty, CPI(M) leader, said, “Only BJP can make such irresponsible statements. There is no scientific evidence in support of this statement.”

Rajya Sabha MP Swapan Dasgupta has submitted a memorandum to the chairman of the National Human Rights Commission. The letter complains about the irresponsible and inhuman behaviour of the police at the BYJM demonstration on October 8. It emphasises about the use of coloured water used by the police to break up the gatherings. “At several places, the water was mixed with colour. It is pertinent to note that the use of coloured water has been the hallmark of the Chinese authorities in dealing with the protests in Hong Kong,” mentioned Dasgupta.

Moreover, BJP MP Locket Chatterjee has written a letter to the Union Home Minister Amit Shah on Wednesday. In her letter, she urges him to seek a report from the West Bengal government over the use of “chemicals” in water cannons that were used at the party rally, last week.

Chatterjee alleges in her letter that “Harmful chemicals” were used to disperse the “peaceful crowd of protestors”, which was unprecedented in India.

Kha’s statement has led to an embarrassing situation in the state’s BJP unit.

Shamik Bhattacharya, BJP leader, said, ”I do not have any knowledge whether coloured water contains coronavirus or not. But, if Kha has said such a statement maybe he has got some proof in this regard. This is not BJP‘s statement.”

However, another BJP leader, Jayprakash Majumder, defended Kha’s statement. He said, ”No doctors can conclusively say that there is no proof that the water used in the rally cannot contain Coronavirus. Kha made this statement, as he has got proof. Moreover, it is illegal to throw coloured water at people. It’s toxic and harmful.”

According to senior BJP leaders, the Supreme Court has already instructed not to use coloured water on protestors after it was used in the state of Kashmir to disperse the mob.  BJP seems all determined to fight tooth and nail against this illegal move of using coloured water by the Mamata Banerjee government during the BYJM Nabanna Abiyan rally.

Senior doctors are of the opinion that there is no study to indicate that the water contained Coronavirus.

Dr Yogiraj Ray, a senior virologist associated with Beleghata ID Hospital, said, “We are not aware of the fact that the water contained Coronavirus. There is no scope that swab samples can be taken out from here and mixed with water. The swab samples are kept in the fridge at a temperature soon after it is collected from the patient’s body and then it is put in the machine. So, there cannot be any such probabilities.”

From time and again, BJP leaders have been commenting unscientific claims about the Corona virus.