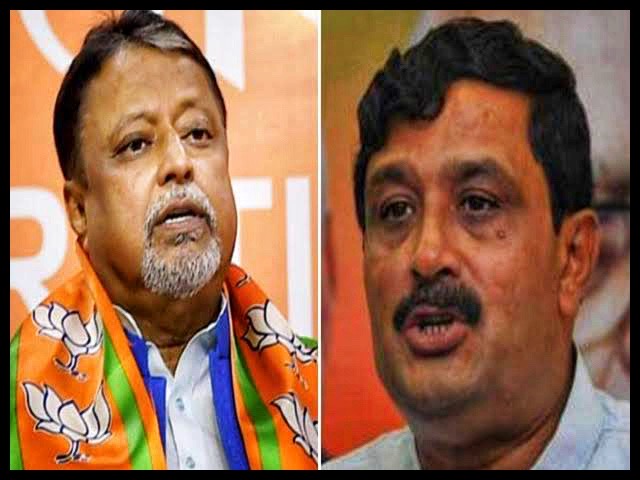 The latest internal reshuffle in the BJP does not seem to be have gone down well with all the state party members. One of the West Bengal’s biggest party leaders, Rahul Sinha, could not have been more displeased after he was dropped as the national general secretary.  While Trinamool Congress mentor Mukul Roy was promoted on Saturday.

KOLKATA 28 SEPT: The importance of Bengal for the BJP seems to be growing. The soldiers who moved on from Trinamool Congress to hold important positions in the BJP seems to have added some fuel to the existing internal feud inside the state BJP.

A section of leaders has been claiming that their role has not been acknowledged by the state BJP despite their best efforts to increase the BJP’s foothold in Bengal.

On Saturday JP Nadda, BJP president announced   Mukul Roy as the national vice president. Three other leaders who were brought in from TMC have also been elevated in the national team. It includes former parliamentarian Anupam Hazra and Lok Sabha MP Raju Bista who will serve as national secretary and national spokesperson respectively.

According to sources in the state BJP, the general perception that those who come from Rashtriya Swayamsevak Sangha (RSS) background has been given more importance.

Meanwhile, former national secretary Rahul Sinha has been removed from his post. This has led to a considerable increase in the feud inside the state BJP. This is a notable reshuffle move because it was not only Sinha who was dropped but some senior prominent leaders were too. Big leaders like Ram Madhav, Murlidhar Rao and Anil Jain were the few seniors who did not make the list.

Sources in the state BJP said the division inside the state BJP has been very conspicuous. This took an uphill route especially after a day of the announcement of the posts. A section of BJP leaders who are close to Rahul Sinha believes the more deserving candidates who have worked hard to establish the party in Bengal have been now tossed to the backbench. And the turncoats have been rewarded with bestowing more responsibilities on them in the state BJP.

Senior BJP leaders are of the opinion that the reshuffle has been made keeping in mind the performance of each and every leader. More such reshuffle is on the cards for the party.

Political analysts are of the opinion that the general perception of the public has taken a turn as far as the state BJP party politics is concerned. Previously, it was believed that those from RSS would be given important positions to hold. But this recent reshuffle has defined the change in the political dynamics. Now, it seems the main idea is to stay in power and the ideologies of the saffron party seem to have taken a backseat for now. This is soon becoming a trend with other political parties as well.

“Nowadays with the change in the socio-economic situation, the ideals of strong political parties has changed. Irrespective of ideals, they only know how to keep themselves in power. Accordingly, they strategise their ideas. With Assembly elections near and a section of BJP leaders who are close to Roy wants him to be an important leader. They believe he was instrumental in bringing in many leaders from TMC to BJP,” said Imankalyan Lahiri, a senior political analyst and Professor of International Relations, Jadavpur University.

“The feud inside the state BJP will increase. The national leadership has carefully decided on the reshuffle ahead of the Assembly elections. This was to give more importance to the new leaders so that they can help to overthrow the TMC government. Moreover, the national leadership was not happy with Sinha. He failed to achieve the targeted goals that were set for him. The reshuffle might lead to temporary feud inside state BJP, but it can happen if a party wants to expand its base in a state,” said a senior BJP leader.

A section of senior BJP leaders believes that Sinha was not capable of winning elections. They feel he lacks the charisma required and he does not have the capability to defect the leaders who are speaking against Mamata to join BJP.

Rahul Sinha, in a voice message on social media, said, “I served the party as a soldier since its birth. And this is how I was rewarded. Nothing can be more unfortunate. I will make a statement after 10-12 days and decide my future course of action. After serving for 40 years, I had to make way for TMC leaders in the BJP. This is very unfortunate.”

Dilip Ghosh, state BJP president, said, “There is no feud inside state BJP. We will work together to overthrow the TMC government in the upcoming Assembly elections in 2021.”