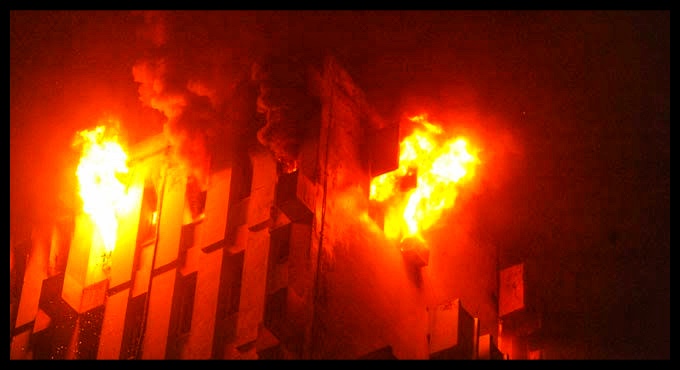 KOLKATA /RAMPURHAT 22 MARCH :  At least eight bodies were charred to death following the killing of a Trinamool Congress deputy leader Bhadu Sheikh of Borosal panchayat at Bokti village at Rampurhat in Birbhum.

The death has led to massive political instability in the area as miscreants burnt down 10 houses following the killing of the TMC leader.

Senior officials of the district administration said that till now 11 persons have been arrested on this connection. The OC of Rampurhat police has been closed and a sub divisional officer has been suspended.

Soon after the incident the state government has formed  a three member  special investigation team to probe the incident. The IPS officers includes Gyanwant Singh,Meeraj Khalid and Sanjay Singh.

Sheikh’s father claimed that they are petrified with the entire violence taking place in the village and they have shifted to a different village as they are being threatened by the local people .

Manoj Malviya state director general of police said that they are investigating the case. Total casualties stand at eight. Seven  bodies recovered from one home. One person in the hospital has succumbed. It does not look like a case of political rivalry. Investigation  is underway.

According to Trinamool Congress leaders , BJP is trying to destabilise the state , and they are trying to create  lawlessness in the state as they are jealous with the state’s development.

Partha Chatterjee TMC leader said “ Our leader has been killed . An investigation has been initiated ,but BJP leaders are trying to create lawlessness in the state as they are jealous with the state’s development . There is no need to create unnecessary tension before the enquiry process in completed .”

According to BJP leaders , they demanded immediate resignation of chief minister Mamata Banerjee as she has failed to improve the law and order in the state. They have also sent a deputation to the Governor demanding Presidents rule in Bengal.

Suvendu Adhikari BJP Opposition leader said in a series of tweets, urged central intervention and alleged “terror and tension” in the area.

The BJP leaders staged a walk out at the Assembly in protest against the alleged terror and tension at Bokti village in Rampurhat. They claimed that the incident  is similar to the Chhoto Angaria  case of  West Midnapore’s Garbeta, 11 Trinamool workers were claimed to have been burnt to death by local Communist Party of India (Marxist) leaders on the night of 4 January 2001.Mamata Banerjee, the then main Opposition leader, had hit the streets to draw political capital from the flames of Chhoto Angaria. Thirteen people charged in the 2001 massacre were acquitted in 2009 for lack of evidence.

West Bengal Governor Jagdeep Dhankhar on Tuesday strongly condemned the violence in Birbhum  saying human rights have been “decimated” and rule of law has “capsised”.

In his tweet he mentioned “Offering condolence to the families of those who lost their lives, the Governor said that the state is in a “grip of violence culture and lawlessness”. He said that he was pained and disturbed at the “horrifying barbarity” at Rampurhat in Birbhum, where eight people were burnt to death after a mob allegedly set houses on fire following the killing of Trinamool Congress leader Bahadur Shaikh. Around 10-12 houses were set on fire by the mob last night and charred bodies were recovered by the police this morning.

Here is a tweet by Governor Jagdeep Dhankhar on this regard

In reply to his tweet chief minister Mamata Banerjee wrote a letter to the Governor over Rampurhat violence saying his remarks on the incident is ‘unwarranted’, requests him to refrain from making sweeping statements.

Meanwhile the BJP Delhi has also formed a five member fact finding committee to visit the spot and a submit a report to the party president JP Nadda.