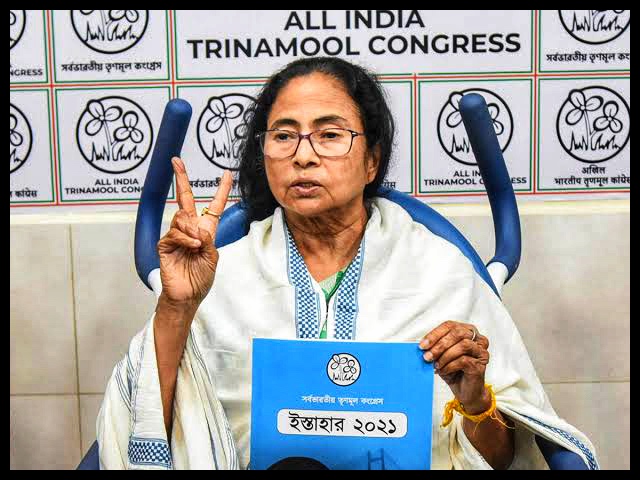 KOLKATA 17 MARCH: Just a day after BJP President JP Nadda slammed the Trinamool Congress for doing precious little for the people belonging to the Other Backward Classes (OBC), the ruling party’s chief Mamata Banerjee unveiled a manifesto where she introduced various cash incentives schemes for various sections of the community .

The manifesto of 2021 is distinctly different from 2016 TMC manifesto which mainly highlighted the achievements of the TMC government.

The manifesto promises an income scheme for all families, a constitution of a task force to examine the various new communities under the OBC category. Also, a student credit card.

Along with the development plank for the OBC and the underprivileged class, Mamata came out with a slew of social security schemes for general people in their manifesto that she released from her Kalighat residence.

Moreover, the manifesto talked about how a special task force will be constituted to examine and propose OBC status to all the communities that are currently only recognised as OBCs. Especially, communities like Mahisyas, Tilli, Tamul, Sahas have only been a part of the recommendation list of the OBC communities in the Mandal Commission.  Along with this expeditious closure, there will be an assurance of paying attention to the demands of Kisan Jatis living as Scheduled Tribes in parts of Malda district.

According to the manifesto, Banerjee promised basic monthly income support for women in a 1.6 crore household. In particular, the order runs as follows: ₹500 in the general category,  ₹1,000 to SC/ST families student credit cards, doorstep delivery of rations to 1.5 crore families, and 2,500 Maa canteens.

Apart from these schemes, the TMC also promises 5,00,000 new jobs every year. Also, an investment worth five lakh crore in the next five years. In addition, the manifesto also mentioned that health expenditure will be doubled and a model school would be set up in every block of the state. In fact, the manifesto also talked about how in the next five years, Bengal would emerge out as the fifth largest economy in the country with a GDP size of ₹12.5 lakh crores. Also, with an annual per capita income of more than ₹2.5 lakhs.

Further, the manifesto mentioned how the TMC government will uplift an additional 35 lakh people from poverty in the next five years. Also, aim to reduce the unemployment rate by half. Mostly, by creating 5 lakh jobs annually.

Interestingly, Mamata Banerjee tweeted the 10 ‘promises’ that the party declared in their election manifesto. She tweeted, “I humbly present my 10 ‘Ongikars’ to build a stronger & more prosperous Bengal so that the wheels of development keep moving forward in the third term of our government. The aim is just one, to sustain Bengal as one of the leading states in the country.”

*Fifth largest economy with GDP size of ₹12.5 lakh crore and annual per capita income of more than ₹2.5 lakh.

*35 lakh people uplifted to reduce people below the poverty line to 5 per cent from 20 per cent in 2011.

*5 lakh new jobs per year to be created to cut down the unemployment rate by half.

*A New scheme to ensure monthly basic income support to female heads of 1.6 crore households of Bengal. Especially, a monthly ₹500 to families of General category (yearly ₹6,000) and ₹1,000 to families of SC/ST (yearly ₹12,000).

*To make Bengal’s youth self-reliant, a new scheme would be launched for all eligible students. Students Credit Cards with a credit limit up to ₹10,00,000 at an interest rate of 4 per cent.

*75 crores subsidised meals at ₹5 per meal through 2500 ‘Maa’ Canteens across 50 cities in Bengal.

*₹10,000 per acre support to be provided to 68 lakh small and marginal farmers every year under the Krishak Bandhu Scheme.

*To be the number 1 state in Net Sown Area and Cropping Intensity by adding 3 lakh hectares of cultivable land and converting 4.5 lakh hectares to double cropping system respectively.

*To be in the top 5 states in productivity for food grains and four cash crops – Tea, Potatoes, and Tobacco.

*Additional 10 lakh MSMEs to be added every year to increase the total number of functional MSME units to 1.5 Cr.

₹5 lakh crore of new investments in the next 5 years.

*Double the number of seats for – doctors, nurses, and paramedics.

*Increase the spending on Education from 2.7 per cent to 4 per cent of the state GDP.

*Each block to have at least one Model Residential School

*Double the number of seats for teachers’ training.

*5 lakh additional low-cost houses to be built under Banglar Bari Scheme in urban areas to reduce slum population from 7 per cent to 3.65 per cent.

*25 lakh additional low-cost houses to be built under Bangla Was Yojna in rural areas and reduce Kutcha houses to less than 1 per cent.

*Piped drinking water facility to be provided to additional 47 lakh households to ensure 100 per cent coverage; up from 26 per cent

*24X7 electricity at affordable rates to all households.

*Every rural household to be connected with all-weather roads, a functional drainage system, and piped drinking water.

According to the BJP leaders, after 10 years, Trinamool Congress is now, speaking about development. If they have already worked at developing the state and have already provided schemes for all sections of people, then why does their manifesto speak of basic minimum support for women. Senior leaders claim that it is a poll gimmick.

Shamik Bhattacharya, a BJP leader, said, “What have they done in the last 10 years? Now, suddenly they seem to be awake and mentioning that they will provide a basic minimum income for 1.6 crore households in their manifesto. Banerjee had already said in the 2019 Lok Sabha election that they have completed all the development work for Bengal. Then why they are talking about this in their manifesto, now?”

Meanwhile, CPI(M) and Congress leaders also claimed that it’s purely a poll gimmick. They too agreed that Banerjee had already said she has completed her work in Bengal.

Sujan Chakraborty, CPI(M) leader, said, “Her manifesto that she released today said a different story. If she has completed all her work in Bengal and if they have worked for all sections of the society, then why she is trying to provide more schemes, now?”

It may be worth mentioning that West Bengal will be voting for the 294 Assembly seats in eight phases. This is to take place between March 27 and April 29. The counting is scheduled for May 2 along with other poll-bound states of Assam, Kerala, Tamil Nadu, and Puducherry.