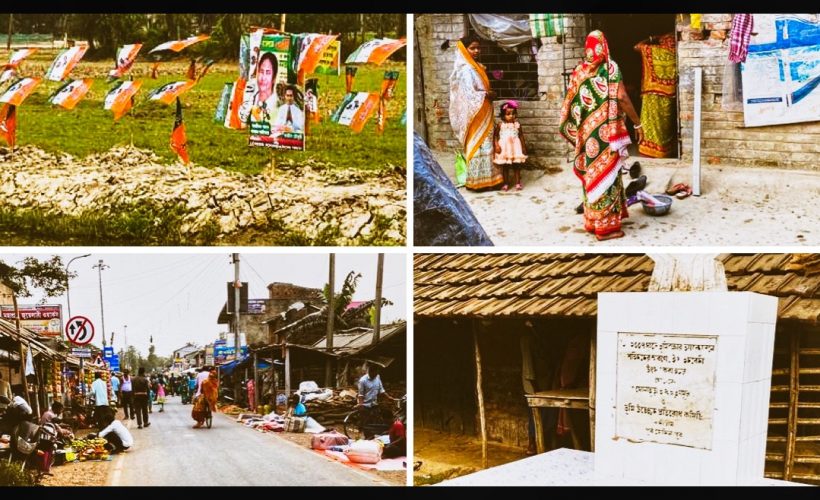 NANDIGRAM 29 MARCH: Anti-incumbency and communal polarisation are both pitched to play a big role in the upcoming elections at Nandigram on April 1. The fight between Suvendu Adhikari and Mamata Banerjee is locked in a tough battle. Both major political parties seem to have used all the arrows in their quiver.

According to Mediabuzznews’ reality check in Nandigram, the majority of voters are tight-lipped about their choice, though there is still a section of voters who have come forward to say that despite some of her negative actions, she will have the last laugh here.

Moreover, Sonali Manna, who runs a tea stall at the Sonachura market, said, “The battle in Nandigram will be a tough one as both of them are trying to turn their voters on their side. While Adhikari family has tried to create communal polarisation by mobilising the Hindu votes, especially in Nandigram II. Though, TMC has an edge in Nandigram I, as the Muslim population is higher there than Nandigram II.”

It is believed that the communal polarisation in Nandigram started much before Suvendu Adhikari joined forces with the Bharatiya Janata Party, officially. In fact, to acquire sympathy from the families of the 19 martyrs of Nandigram, Adhikari was providing free medicines and free rations to all the martyrs’ families. This was from the TMC fund every month and that too before the Swasthya Sathi scheme and free ration for all was introduced by the Mamata-led TMC government.

According to the martyrs’ family, Banerjee did not even pay a visit to Nandigram after she came to power. It is Adhikari who has taken care of all their needs from the very beginning.

Soudamini Mondal, the mother of deceased Bharat Mondal, said, “Didi never came to visit us or enquired about our condition. But, Adhikari frequently visited our households and checked on our financial condition. TMC provided a job as a house-maid to my daughter-in-law and also a government job to Bharat’s uncle. But our financial condition did not improve much. During the Cyclone Amphan, we lost our roof and we did not get any help from the TMC leadership despite Banerjee claiming that they have spent crores of rupees for the Amphan-affected victims.”

According to Mondal, during that time too, Suvendu Adhikari helped them. Also, he had promised to improve our financial condition more, if BJP comes to power.

Mostly, the polarisation between Hindus and the Muslims in Nandigram only came into the open forum after Adhikari joined BJP, officially.

While the Hindu voters are openly claiming that they have been beaten up by the Muslim TMC workers at Nandigram, Muslim workers claim that local personal issues of two individuals have been given a political narrative to counter TMC.

Meghnath Pal, poll agent of Adhikari, said, “The fight in Nandigram is especially between the old TMC cadres versus new TMC cadres. The way the Banerjee government has neglected the TMC workers day in and day out, has led to a grievance build-up among the TMC leaders and workers. And as a result, a huge number of TMC workers have shifted their allegiance to BJP, majorly, after Adhikari officially joined BJP.”

Trinamool Congress Continues to Fight Tooth and Nail with BJP

According to local TMC workers, BJP leaders do not have any issue amongst themselves. In fact, Suvendu Adhikari picked up an issue that is not related to the election, a few days back to counter the TMC.

It may be mentioned that few claimed that in Nandigram, TMC supporters are those who support Pakistan’s victory. They only think about the welfare of the Muslims.

Kamal Kumar Jana, a TMC Nandigram block committee member, said, “In Nandigram, BJP leaders are trying to divide the vote between Hindus and Muslims and this is clear from the statement of Adhikari a few days back. His statement has nothing to do with the election. They cannot question the TMC on development.

Senior TMC leaders in Nandigram said that in her public rally, Banerjee has openly narrated how the Adhikari family called the shots at Nandigram. Also, stressed the fact that the family did not allow her to enter Nandigram. Despite Adhikari being given the portfolio of several ministries in Mamata’s cabinet, and also important portfolios in the Contai, Tamluk area, Adhikari committed an obnoxious act of treachery with the party. Now, he is trying to fool people by portraying a different version.

Notably, after coming to power, Mamata Banerjee entrusted Adhikari to look after the welfare of the people of Nandigram. Also, the state government has already redeveloped the roads that had already caused damage to the insides of the villages.

Sanjoy Bunia, TMC block president of Sonachura in Nandigram, said, “There has been a distrust among people after Adhikari joined hands with the saffron party. This was evident from the conversation of the people in their daily lives. It is difficult for people to believe Adhikari completely now, as the trust is lost.”

Also, another tea shop owner at Sonachura market, Sahanora Bibi, said, “Trust can be gained over a period of time, but Adhikari has lost that trust in people. Although he can get votes from his core vote bank, the general people of Nandigram are disturbed by the way he cheated Banerjee. Banerjee gave him everything. He was not only the minister, but he was in charge of various development boards in Haldia and Nandigram, too. It’s a pity that he cheated Banerjee and finally joined hands with a rival political party.”