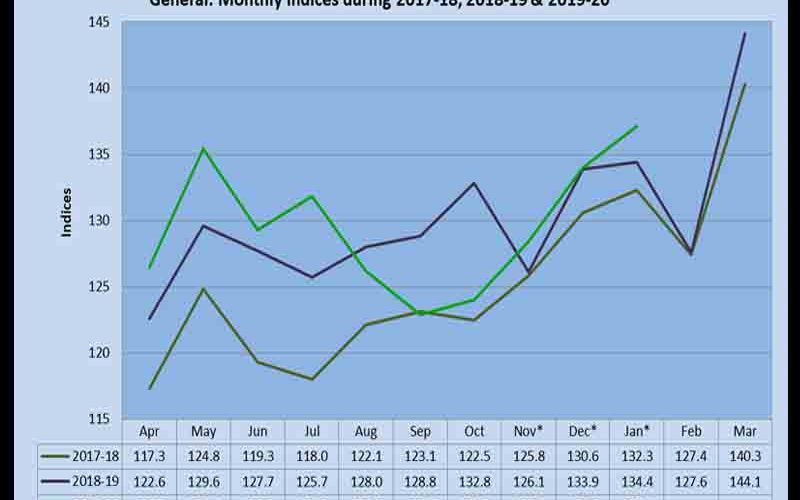 New Delhi 12 March : With COVID-19 being declared a global pandemic now, the Union government should step up efforts to minimise the impact of Coronavirus to ensure that India’s economic growth does not slow down again . However if the situation goes out of control even after the government’s best efforts then things would go down to worst, fears many economic analysts.

India’s industrial output expansion of mere 2 per cent in January offers no clue to growth recovery. Yet another month of flat factory output negates optimism of economic revival anytime soon. The threat of Corona virus disrupting the already sagging domestic demand might further take its toll on India’s economic growth.

India’s industrial production grew modestly by 2 per cent in January as compared to the same month last year, according to the index of Industrial Production (IIP) data released on Thursday by the Union Ministry of Statistics and Program Implementation .

The aggregate growth in industrial production for the period April-January stands at a mere half per cent. In fact, for most of the months since April 2019, India’s industrial production has either been in negative territory or has registered a very low single-digit growth, thereby, suggesting that the manufacturing activity which has huge job-creating potential is down and out for quite long now. The IIP data for the coming months could be even scarier as it would capture the adverse impact of Coronavirus on India’s domestic demand.

About one-fourth of India’s GDP growth comes from industrial activities wherein the manufacturing sector has about seventy per cent (70 %) weightage. “Government’s own estimates of India’s GDP growth has been revised to a mere 5 per cent for the current fiscal (2019-20) which confirms that manufacturing growth has been and is expected to be quite subdued” says Sunil Sinha, principal economist with India Ratings & Research.
As per the IIP data, 12 out of the 23 industry groups in the manufacturing sector have shown negative growth in January 2020 as compared to the corresponding month of the previous year. The industry group ‘Printing and reproduction of recorded media’ has shown the highest negative growth of (-) 16.3 per cent followed by (-) 11.6 per cent in ‘Manufacture of computer, electronic and optical products’ and (-) 10.6 per cent in ‘Manufacture of motor vehicles, trailers and semi-trailers’.

After the IIP data was released, Congress leader Rahul Gandhi tweeted and urged the government to take this threat seriously . The Indian economy will be destroyed if strong action is not taken.

The IIP data, which captures industrial growth in the organized sector, had not been very encouraging ever since the demonetization and thereafter the GST, created major disruptions in industrial activities both in organized as well as in the unorganized sector. With no cash in hand to run factory operations, many small scale industries had to close down their shutters creating large scale unemployment. Since there are significant linkages between unorganized and organized sectors, things going wrong with the former does also impact the organized sector and the gloomy IIP data only proves that linkages and its negative impact. “What has compounded the pain for the manufacturing sector is the total collapse of consumption demand in the country since the beginning of this fiscal year (March 2019 onwards). Demand drivers for manufacturing growth emanating from consumer durables, auto, real estate and such likes had been quite weak” explains Sinha.

Does the RBI or the government have the policy space to give any momentum to the economy?

A section of economists are not very optimistic on this either. Given the government’s low taxation revenues, the fiscal space seems non-existent. The RBI on its part has already cut interest rates by 135 basis points in the last one year with little effect on credit disbursement. As the overall mood among people is pessimistic, no one wants to take the risk of taking loans from banks. So in such risk aversion atmosphere, even if RBI reduces the repo rates, it might not translate into driving consumption demand in the country.