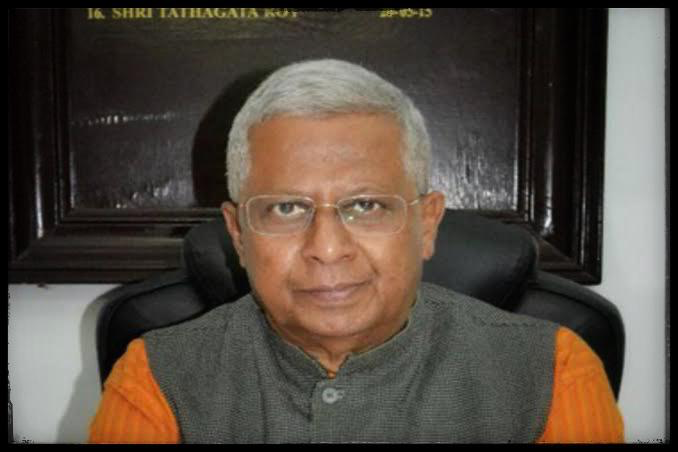 KOLKATA 19 AUG: Meghalaya Governor Dr Tathagata Roy is all set to retire from Raj Bhavan on Wednesday evening. However, he seems to have no plans to retire from politics. Dr Roy aims to come back to active politics. He has shown interest in becoming a part of West Bengal unit of Bharatiya Janata Party (BJP) as the state gears up for the upcoming Assembly Election in 2021. He has shown a keen desire to both Union Home Minister Amit Shah and the Rashtriya Swayamsevak Sangh (RSS).

Although Roy is a veteran leader of BJP, and he has an expertise in party organisational affairs in order to win the trust of the ‘Bengali Bhadralok”, according to sources in the state BJP. Sources believe that amidst this current growing sentiment off regionalism as being evoked by Mamata Banerjee, this new change could prove really helpful.

However, the internal rift inside state BJP has prompted the Central leadership to take any comprehensive plan in this regard. As a result, now the final decision is on the central leadership.

Roy: A BJP leader for over two decades

“I joined BJP to do justice to the Hindus and I have always been vocal about majoritarian sentiment. I was also the chief engineer of Metro Railways in the past. And my wish is to develop the mere infrastructure in Bengal which will pave way for more jobs in the state,” added Roy.

Roy went on to claim that he does not believe that cow urine can cure coronavirus and that it is an absurd statement. Roy further said, “By categorising BJP a Hindu party is wrong. But I support CAA and NRC. The Hindu refugees persecuted in Islamic country have not been given any proper rehabilitation. Hindus from East Bengal has moved to West Bengal, but no Muslims moved to East Bengal. There are some historical mistakes and I feel it should be corrected.”

According to Roy, Dr Shyama Prasad Mookherjee has created West Bengal as a homeland for Bengali Hindus. Mukherjee is widely believed to have saved it from going to Pakistan. He also believes that this fact has been downplayed by the Congress. So he plans to present the historical facts to the people of Bengal in the coming future.

Sources in state RSS said, Roy has profound knowledge of Bengal. State RSS leaders also commonly trust that as Roy is a veteran BJP leader, so they feel he could be the right candidate to take on chief minister Mamata Banerjee.

Roy was also a professor of the department of civil engineering at Jadavpur University and was a profound teacher. RSS seems to be putting in their vote on Roy to win back the trust of the general “Bengali Bhadralok” amidst this hostile environment. Though RSS has a few names in mind there is no confirmation regarding Dr Roy yet, according to RSS sources.