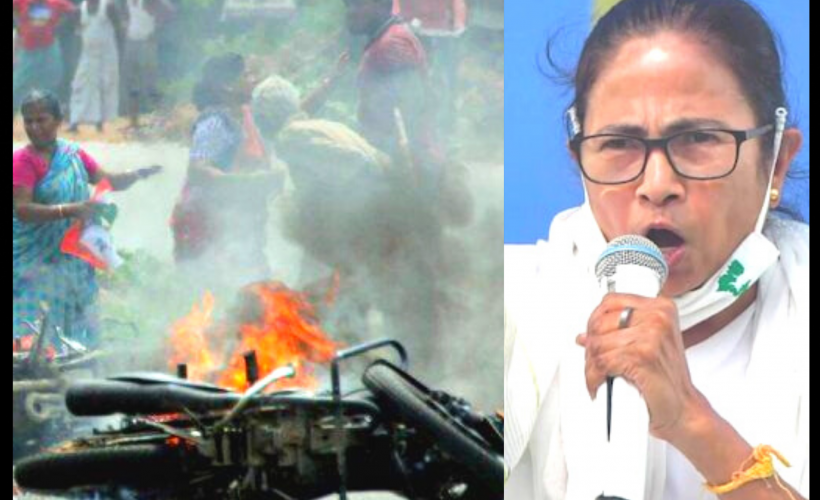 KOLKATA JULY 15: The final report of National Human Rights Commission (NHRC) mentions the names of a few prominent TMC MLAs and councilors who have been involved in the post-poll violence.

The report which was made public before submitting to the Calcutta High Court mentions the name of a few prominent TMC leaders like Udayan Guha of Dinhata, Uma Das and Laltu Das of Chitpore, and Sheikh Sufiyan of Nandigram.

The report slammed the Mamata Banerjee-led in West Bengal clearly stating that thousands of citizens of Bengal were subjected to rape, murder, intimidation, and displacement in the past few months.

Moreover, the 50-page report was signed by NHRC seven members and submitted before a five-judge bench of the Calcutta high court headed by the acting chief justice Rajesh Bindal.

On July 13, the report was submitted to the Calcutta High Court. Reportedly, the investigating team had faced bullying and threats of intimidation at Jadavpur last month. There were at least 1,934 complaints that were reported at various police stations between May 2 and June 20. The complaints included 29 murder, 12 rape and sexual assault, and 940 of arson and loot. The FIR were in the name of 9,304 accused but only 1,345 people were arrested which is only 2.8 percent of the total number of accused in the FIRs. Also, 1,086 people are out on bail out of 1,345 people.

However, soon after the report was made public, chief minister Mamata Banerjee lashed out at the NHRC report, which probed the post-poll violence and claimed it to be a “political vendetta.”

Banerjee said, “The report has been made public to the media before submitting to the Calcutta High Court. This is nothing but a political vendetta. The NHRC should have respected the Court, instead of leaking the findings to the media.”

Banerjee , stated that her government would file a response when the Court asks them to do so.

At a press conference on Wednesday Banerjee said in a press conference, “This is nothing but political vendetta of BJP. They could not digest the fact that have been defeated in the Assembly polls and that is why the party is resorting to such tricks.”

The report mentions that the number of complaints received from various sources are from 1979, and it shows that a vast number of complaints have been received from Cooch-Behar(322), Birbhum (314), South 24 Pargana (203), North 24 Pargana(196), Kolkata(172) and Purba Burdwan(113). Within the administrative districts, the most affected police districts are Baruipur, Basirhat, Barrackpore and Diamond Harbour.

The NHRC committee has recommended for a CBI inquiry and also suggested that a court-monitored special investigation team should be formed immediately consisting of senior supervisory IPS officer and others. The SIT should similarly register FIRs on other complaints that it received through any other means and investigated the same. The SIT should have an email id and a phone number which should be widely publicised, on which related complaints should be recorded and follow up actions should be taken along with related logs maintained that the report intends to mention.

Regarding the leakage of report allegations in a part of the media, the NHRC has refuted all allegations and shared copy of the report with the lawyers of the concerned parties in this matter as per the Calcutta HC’s directions.