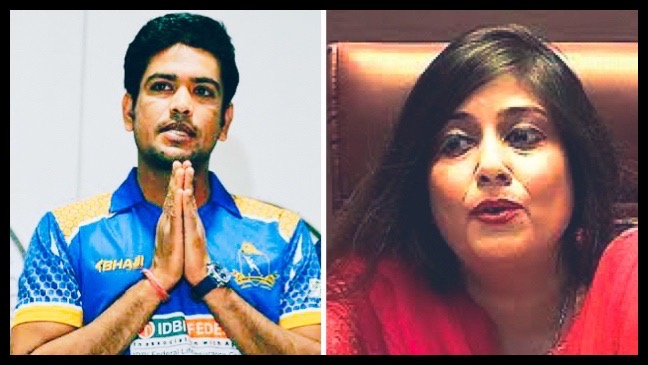 KOLKATA 5 JAN: The resignation of Minister of State for Sports Lakshmiratan  Shukla has once again ignited the internal feud of TMC in the Howrah district with Vaishali Dalmiya , TMC MLA, claiming that those ground level workers who are eating up the party from within are the real traitors and TMC should identify them and take action against them. Shukla also  tendered his resignation from the post of president of Howrah Trinamool Congress.

In fact, TMC MLA from Howrah, Vaishali Dalmiya claimed that the prompt action needs to be taken against such identified ground-level workers.

According to Dalmiya, although she is quite unaware of the reason behind the resignation, she has witnessed how the ground-level workers did not respect their seniors. Also, often would try to create a confusion within the party. In addition, they do not want any new-comers who are working really hard to come to the forefront and try to demoralise many other leaders.

“It is happening for a few years, now. Chief minister Mamata Banerjee is already aware of the matter. She herself tried to resolve the conflict several times. But, then again after several weeks things are repeated. As a result, this hinders several work,” added Dalmiya.

During her address to reporters, she was asked whether she wants to quit the party. Dalmiya said, “Right now, I am not thinking of leaving the party. I am working in the party.”

Few days back, Dalmiya also raised questions on the role of political strategist Prashant Kishor. Also, accused him of driving a wedge in the party.

It may be worth mentioning that Dalmiya is a first-term MLA from Bally Assembly seat in Bengal’s Howrah district. Mainly, she is miffed over some posters that have surfaced at several places in her constituency only a few days back.

Though, a section of local TMC leaders alleged that she is “not found in the constituency most of the time.”

However, she said that the charge is “baseless and politically motivated.”

Further”, Dalmiya said, “I am not an outsider here. I have my home in Bally. Even when Union ministers arrive here, they are called outsiders. So it is quite natural that I will also be termed an outsider. This culture (insider and outsider) should just stop.”