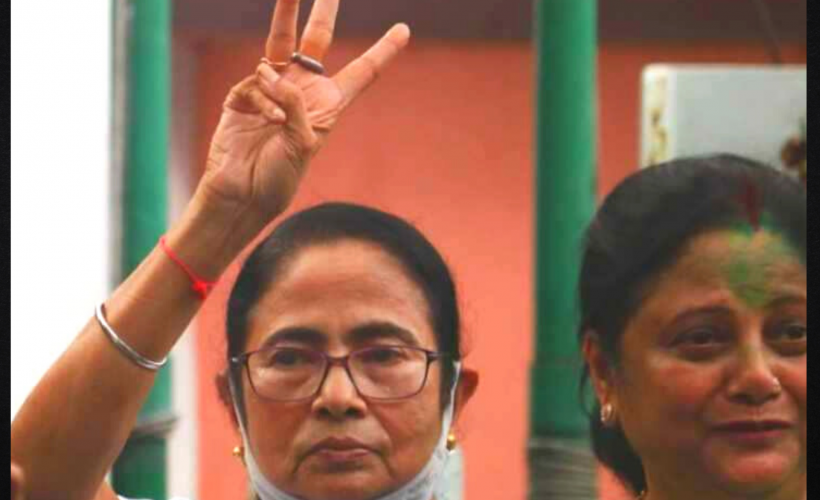 KOLKATA 3 OCT: Trinamool Congress on Sunday, all three by-elections, including Bhowanipore, in which chief minister Mamata Banerjee broke her record of 2011 as she defeated BJP’s candidate Priyanka Tibrewal by a margin of 58,832 votes.

Banerjee said, “It’s the victory of the people as there was a conspiracy going on against us from the beginning of the Assembly election, but it was people who gave the conspirators a befitting reply. I was feeling content today. Despite getting a massive mandate, I was sad because there was a small hitch and a conspiracy against us. I would not comment on the Nandigram result as it’s a sub-judice matter now. This is the first time we did not trail in any of the eight wards. This seat has around 46 percent non-Bengali population, and this time all of them, Hindus, Muslims, Bengalis, and non-Bengalis repose faith in TMC, and I am grateful to them.”

According to Banerjee, for a small hamlet like Bhowanipore, they have sent 3,000 central forces for conducting elections. We kept quiet, and the results once again proved that people were with us.

Banerjee added, “We have won in every ward. I am satisfied because Bhowanipore has shown the way. All eyes were trained on this seat. I have been freshly inspired to work more for the people.

Banerjee had won the Bhowanipore by-poll by 54,213 votes in 2011 after the seat was vacated by her trusted lieutenant Subrata Bakshi. In 2016, Mamata won with a margin of 25,301 votes. In the last three years, during the Lok Sabha elections, Mala Roy, the candidate from South Kolkata’s seat, won with a margin of 3,816 votes. When Mamata Banerjee opted for the Nandigram seat during the Assembly election, Sovandeb Chattopadhyay contested the Assembly elections from the Bhowanipore seat and won by 28,719 votes.

Apart from Bhowanipore, TMC candidate from Samsergunj Amirul Islam won 26,111 votes, and TMC candidate Zakir Hossain has won the Jangipur seat by a margin of 92,232 votes.

Trinamool Congress leaders feel that the result will motivate the workers and leaders to work outside Bengal.

Firhad Hakim, TMC leader, said, “The TMC leaders will feel emboldened to work outside the state after the massive victory of TMC in the by-election.” However, BJP’s Priyanka Tibrewal received 26,000 votes while CPI(M) candidate Srijib Biswas got 4,201 votes.

According to BJP leaders, although Banerjee won with a massive mandate, around 53 percent population voted on a voting day at Bhowanipore indicated that half of the people did not turn upto cast their vote.

Sukanta Majumder, state president of BJP, said, “We accept people’s verdict, and we are happy with the votes received by our candidate.”

According to BJP leader Arjun Singh in the middle of threats and intimidations, their candidate received 25,000 votes. She got her administration and the entire police force to work for her. There has been unprecedented rigging, but still, our candidate managed to receive 25,000 votes.

According to Biswanath Chakraborty, a senior political analyst and Professor of Rabindra Bharati University, the Bhowanipore by-election win will strengthen her aspirations to spread the reach of TMC in other states. Already TMC had shifted its focus to small states like Tripura, Goa, and possibly the win of chief minister Mamata Banerjee is expected to strengthen the party’s foundation.