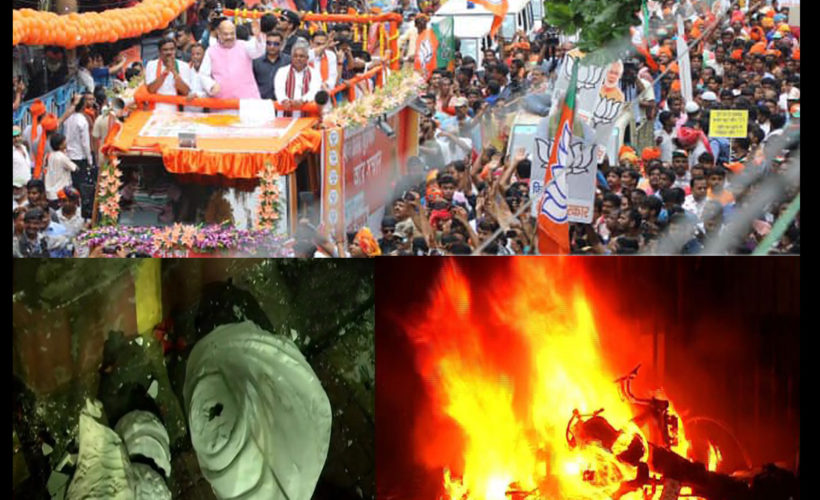 Kolkata : Although 10,000 kilo flowers were brought in into Kolkata for a grand ceremonial road show of BJP president Amit Shah, violence didn’t take a back seat in the TMC-ruled West Bengal on a scorching Tuesday.

Ruckus broke out between Akhil Bharatiya Vidyarthi Parishad (ABVP), BJP supporters  and Trinamool Congress Chhatra Parishad (TMCP) loyalists during the roadshow of Amit Shah at   College Street crossroad, under Kolkata North Lok Sabha seat. Kolkata North and Kolkata South — the two Lok Sabha seats, apart from seven other constituencies  are gearing up for the last phase of polls on 19 May, where the BJP trying to make inroads into the TMC bastions. As a result of the clash the ABVP supporters and BJP supporters barged inside the Vidyasagar college, near Calcutta University campus , broke  the educator’s statue and also vandalised the college .

While West Bengal Chief Minister Mamata Banerjee claimed that at least one student died in the clash, several  eye witness said tension spread after TMCP supporters  who gathered outside the University of Calcutta, waved black flags and shouted, “Go back Amit Shah and Chowkidar chor hain.”

Amit Shah’s road show, which took off from Esplanade, was supposed to stop at the residence of Swami Vivekananda in North Kolkata. The show, however, hit the hurdle midway after flare-ups erupted at College Street.

Several police officers said that a bunch of ABVP supporters tried to move past the guardrails and cause ruckus after they saw TMCP supporters waving the flags. The scuffle  broke out between the two groups when three bikes were torched outside the Vidyasagar College, just about a kilometre away  from CU campus.The statute of Vidyasagar was also vandalised.

A protester sustained head injury when the ABVP and the BJP supporters barged into the college, began vandalising and showering stones at each other.

Soumya Das, a student of CU said “The TMCP supporters allegedly retaliated from the campus. In a counter-attack, the BJP supporters also allegedly tried to smash the barricade of the University. This boomed into a massive unrest between the two groups,”

While addressing a rally at Baghajatin in Kolkata Chief Minister Mamata Banerjee said “A student was killed during the road show of Amit Shah.  An enquiry needs to be done. We will conduct an enquiry after the election .  Law and order is a state subject and it needs to be looked after by the state administration. BJP brought goons from outside Bengal for their road-show today. We condemn the violence. “

Banerjee also said” On Wednesday Trinamool Congress supporters from all over state will wear black badge and convene a rally at several places in West Bengal in protest against the incident .”

Soon after the incident BJP national president Amit Shah tweeted: “The writing on the wall is clear and Mamata didi has read it well. Didi, your violence and hooliganism can no more stop the people of Bengal from reclaiming the true legacy of this great land.”

Soon after, Union Finance Minister Arun Jaitley also tweeted: “ Has Bengal acquired a government of gangsters? The attack on Amit Shah’s peaceful rally by the TMC is deplorable. Is free and fair poll possible in Bengal? All eyes are now on Election Commission.”

He further tweeted: ”Keep it up Amit Bhai. Only Modi Ji and you can do in Bengal what others failed to realise. Victory is now at an arm’s length distance.”

Trinamool Congress MP Derek O Brien tweeted “Desperate BJP goons from outside Bengal smash statue of Ishwar  Chandra Vidyasagar inside the college.Violent mob of BJP ‘outsiders’ in presence of Pukeworthy Shah. How little you know about Bengal, its rich history, its culture. Bengal will never forgive for what you did today.

Later in the night a BJP delegation led by Mukhtar Abbas Naqvi went to Election Commission(EC) and urged them to take action against Trinamool Congress supporters who have deliberately instigated their supporters to create ruckus during Amit Shah;s peaceful road show.

Shah also condemned Banerjee’s politics in Bengal and appealed to the people to give a response to this through the ballot.

It may be mentioned that a large section of the roads in Central Kolkata, from where the roadshow passed, was covered with saffron flower petals.

Political analysts however are of the opinion that this violence shows that BJP is desperately trying to make inroads in Trinamool Congress dominated bastions although they do not have the adequate manpower.

Imankalyan Lahiri , professor of International Relations Jadavpur University said “ The incident of vandalism at the Vidyasagar college highlighted how desperately BJP is trying to grab power in Bengal. On the other hand Trinamool Congress is trying hard to retain their seats by fighting back.”

After the incident social media has been flooded with comments criticising vandalism of the statue of Iswar Chandra Vidyasagar.