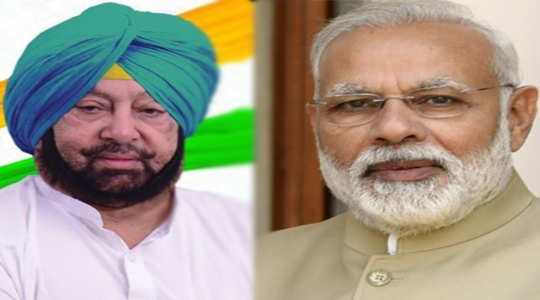 Punjab : After playing a significant role in the recent Lok Sabha elections, religious discourse is expected to dominate the political narrative in Punjab. The simmering of the religious pot suits in the state, particularly ignited by ruling Congress party under the Chief Minister Captain Amarinder Singh and the other political camps of Shiromani Akali Dal (Badal) and Bharatiya Janata Party (BJP) combine, continue to be defensive. The burning issue here is sacrilege of holy texts that was reported in 2015 and subsequent police action on ‘peaceful protestors’ at Kotkapura and Behbal Kalan that had resulted in the death of two people.

With the state observing the 35th anniversary of the Operation Blue Star on June 6, the issue of desecration of holy texts is all set to cast its shadow on the event.

The development that followed the recent poll results have had a major bearing on the political matrix of the state. It all began with the return of the senior police officer Kunwar Vijay Pratap Singh to the five-member Special Investigation Team (SIT) probing the sacrilege instances. He had been transferred out of the SIT during the poll campaign, following a complaint of the Akali leadership after a media interview given by him. His departure is said to have a bearing on the poll results where the Congress won eight of the 13 seats. The Akalis barely managed to win two seats, with the party president Sukhbir Singh Badal winning from Ferozepur and his wife and union minister Harsimrat Kaur Badal from Bathinda.

Just a week back, Kunwar Vijay went ahead and filed a charge sheet in a Faridkot court that reportedly indicted Sukhbir Badal, former Director General of Police Sumedh Singh Saini and Dera Saccha Sauda head Ram Rahim for the instances of sacrilege. The Akalis have been in the dock for the apology granted by the Akal Takht to Ram Rahim in 2015 for blasphemy which was later withdrawn after a public outcry. The Akalis dominate the supreme religious institutions like Shiromani Gurudwara Prabandhak Committee (SGPC) and Akal Takht. The people are also annoyed at the SGPC having spent crores on the advertisements in defending the apology.

Majority of those arrested for the instances of sacrilege are followers of the Dera. Former Chief Minister Parkash Singh Badal has a lot of explanation to give on these issues.

While the filing of the charge sheet started a fresh round of politics, matters have got further complicated with other members of the SIT reportedly disassociating themselves with the charge sheet.

The Congress has further gone on the offensive with cabinet minister Sukhjinder Singh Randhawa saying the Panthic (religion) mask is off the faces of the Badals and the family must renounce politics. He even said that Sukhbir Badal should resign from both the parliament as well as from the SAD.

On the other side, Akalis have hit back with Harsimrat asking Amarinder to own moral responsibility for politicizing ‘unfortunate incidents of police action in Kotkapura and Behbal Kalan’ after the charge sheet was filed by his ‘blue eyed officer’ had been debunked by the entire SIT team of senior police officers.

“Now, he has been exposed again with the entire SIT team objecting to politicisation of the inquiry into the police actions and stating on record that the CM’s blue-eyed boy IG Kunwar Vijay had filed a charge sheet in the case without even consulting them. This shows how politicized the inquiry has become. Like the Ranjit Singh Commission report, this charge sheet has also apparently been prepared in the Congress Bhawan,” she said in a public event.

The Aam Aadmi Party (AAP) that has got a window for revival with the victory of Bhagwant Mann from Sangrur is also trying to strengthen its foot hold through the issue. Leader of Opposition in Punjab Assembly, Harpal Singh Cheema has accused the state government for posing hurdles in the process of free and fair investigations into the sacrilege instances. He said there have been political pulls and pressures to sabotage the investigations right from the beginning and if other members had issues with Kunwar Vijay, why didn’t they speak up during the course of investigations? Why did they raise their ‘objections’ on his being overbearing only after the filling of the challan. He said that both the state and central governments are not interested in bringing those behind the sacrilege acts to book.

Sikh hard line group Dal Khalsa has also expressed major concern on the police becoming a highly politicized force. Dal Khalsa leader Kanwar Pal Singh said, “After doing criminalization of the force, the ruling parties have done its politicization. And for this both Congress and SAD (Badal) are responsible. The visible split in the SIT is not on professional lines but on political to give relief to Badals and to show Kunwar Vijay in a poor light. Dal Khalsa is of the view that previous and present political leadership has bitterly failed in bringing discipline in the force.”

Meanwhile, Dal Khalsa has been garnering support for the Bandh called by it on June 6 at Amritsar to mark the 35th anniversary of Army operations on Golden Temple that was codenamed Operation Blue Star. Dal Khalsa activists would hold ‘Genocide Remembrance March’ on the streets on June 5, the day the army entered Darbar Sahib in June 1984.

Kanwar Pal said, “Since 1984, there has been a change in political leadership with some Sikhs at the helm of affairs both at centre and the state. This however has not healed our wounds of June 84.”

He said the aim of the march was to reiterate the cause for hundreds of Sikhs who laid down their lives in 1984 while defending the attack adding that no issue of Sikhs has been solved till date. He said the Indian state came up with a military solution to Punjab problem that was political in nature.  The hard line Sikhs have been complaining that the entire approach of the state till date has been anti-Sikh.