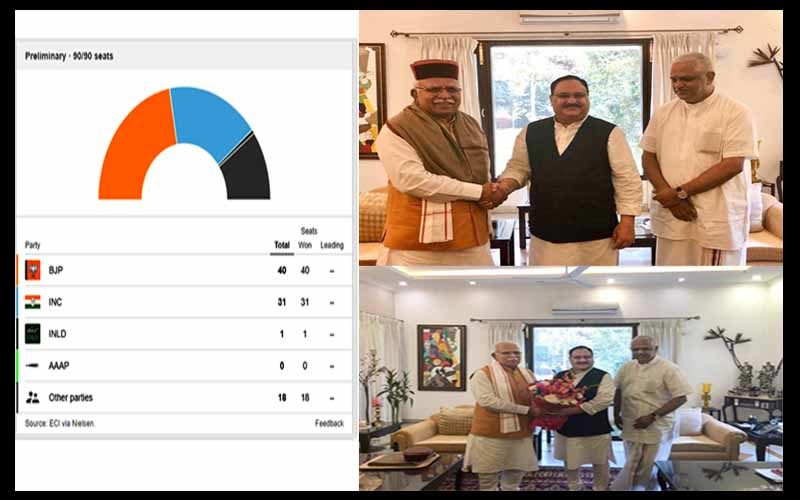 Haryana : The Bharata Janata Party’s hopes of forming a majority government in Haryana have been dashed with voters giving a fractured mandate.

The fates of both the BJP and the Congress hang in balance now with each party trying to garner the support of the JJP and the Independent candidate to form the government.

The state, that gave birth to the expression ‘Aaya Ram Gaya Ram’, which translates into horse-trading in Indian politics, is all set to have a taste of its own medicine.

Whichever party forms the government will need to cobble up support from outside its own set of legislators.
This apart, the most interesting thing has been the surprising results that were way off the mark than what was predicted by most of the exit polls and poll pundits. The BJP that has eventually got 40 of the 90 seats, was expecting a far better performance.

It had gone into the ring with the slogan ‘Ab ki baar 75 paar’ (This time more than 75 seats) hoping to beat the record performance of Janata Party in 1977 when it had won 75 seats. The Congress that had been written off came out with an impressive performance increasing its tally from 14 in the last Assembly polls to 31.

The traditional political powerhouse of Indian National Lok Dal (INLD) struggled for survival winning just one seat. The surprise performance, however, came from Jannayak Janata Party (JJP) that had come into existence barely ten months ago. The rookie party managed to win 10 seats giving its leader Dushyant Chautala an opportunity to be the king maker.

The question that arises is what made the poll predictions by political pundits go topsy turvy and why they failed to make sense of the signals coming from the ground.

To begin with, it needs to be underlined that the politically-aware people of the largely rural state understand the difference between the issues that play out in the Lok Sabha and the Assembly polls.

This is where the Prime Minister Narendra Modi and his close confidante Amit Shah faltered. The duo continued playing up their brand of hyper nationalism attacking Pakistan for the ills in India and creating hype around the abrogation of Article 370 in Jammu and Kashmir.

Despite the fact that Haryana sends a large number of youth to the military and para military forces the people were in no mood to vote only on these issues. They, like the people in other states, were keen on issues pertaining to the revival of the economy, employment avenues, tackling the high rate of crime against women, addressing farm distress, health and education.

The results also point at the assertion of the all powerful Jat community. The caste polarization that had emerged after the Jat reservation stir of 2016 did not yield results for the BJP.

The Jats that had stood pitted against the remaining 35 Biradaris (communities) in the state, voted tactfully behind the Congress and the JJP. They were anyway not happy with Manohar Lal Khattar, a non Jat Punjabi, being the chief minister and had wanted the top post for their community that accounts for almost 30 per cent of the state’s population.

The anti Jat image of the BJP took its toll. Barring a couple of ministers, the remaining members of the Khattar cabinet had to bite the dust.

Even otherwise the Khattar administration stood unraveled time and again during its five year stint. First it was the violence at the time of the arrest of Godman Ram Pal in Hisar in 2014.

Then it was the mayhem during the Jat reservation agitation of 2016 that was followed by Panchkula violence at the time of conviction of Baba Ram Rahim in 2017. The spiraling graph of crimes against women, terror unleashed by cow vigilantes, the anti-Muslim tirade in South Haryana and incidents of violence against Dalits added to it.

Yet BJP has emerged as the largest party with an increased vote share and Khattar has come out saying that as soon as the BJP forms the government in Haryana, the public work will speed up through ‘an honest and accountable government’. He said that the work of creating a strong and prosperous Haryana will be carried forward continuously following the basic motto of ‘Sabka Saath Sabka Vikas’.

The results could have been far better for the Congress had its high command shown some dynamism. Despite knowing that the former chief minister Bhupinder Singh Hooda was its best bet and the only Jat face with a pan Haryana acceptance, it gave him the reins of electoral the battle only in September.

At the same time it replaced the state unit chief Ashok Tanwar, something that Hooda and his supporters were seeking for years, with Kumari Selja. With hardly seven weeks to deliver a victory after a lull of three months after the Lok Sabha polls, this is probably the best that could have been delivered.

Hooda told the media persons on the day of the counting, “Had I got some more time we would have got an absolute majority.” As a last effort he issued an appeal to all the non-BJP forces to join hands as he described the results as the negation of the BJP by the people.

This was the worst performance by the INLD that won only one seat with senior most leader Abhay Chautala returning victorious from Ellenabad constituency.

It was a big slide from being the main opposition in 2014 with 19 seats. The party launched by former deputy prime minister Chaudhary Devi Lal had seen a vertical split about a year ago with Dushyant Chautala going on to launch the JJP.

Abhay has ruled out supporting the Congress saying he would not support a party that had ‘framed’ his father and former chief minister Om Prakash Chautala and his brother Ajay Chautala who are currently serving a jail term. “INLD leaders and workers cannot support such a party,” he said.

With 10 seats in its kitty, it is the JJP that is the main gainer from these polls. With party leader Dushyant Chautala just being 31 years old, he has a long way to go in politics.

It was only in May this year on the eve of the Lok Sabha polls that Balbir Singh of Gohana who had been associated with Chautala family for almost three decades had told this reporter, “The JJP will not get much support in the Lok Sabha polls but Dushyant holds a lot of promises and in the coming Assembly polls the party will surely win a number of seats, particularly in the INLD bastion.” His words stand true today.

Meanwhile Dushyant has described the poll results as a fallout of ‘huge anti incumbency against Khattar government’.

Whoever forms the government in the state, instability will always be lurking. The results here indicate that the hyper nationalism of Modi-Shah variety cannot be taken for granted by the BJP. It is also time to address the pressing issues of economy and employment if the party wants to march ahead. At the same time, all is not over for the Congress and for the JJP the journey has just begun.