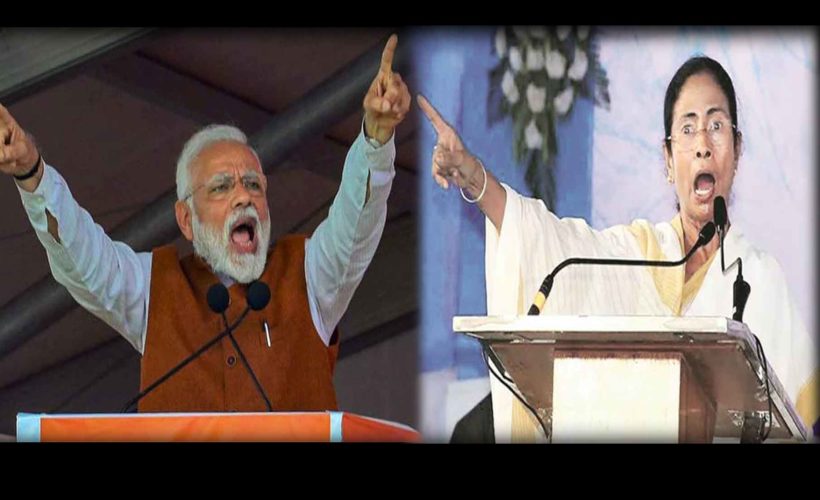 Kolkata : Verbal abuses and personal jibes seem to be the latest favourite of several political party leaders in West Bengal as the Mamata Banerjee-ruled eastern India state prepares for the final phase of Lok Sabha polls this Sunday.

Recently, Prime Minister Narendra Modi had also said that “bua-bhatija”, meaning Mamata-Abhishek, duo is engineering the state’s political affairs these days. “She (Mamata Banerjee) knows that she won’t be able to reach Delhi now. Maan me kutch alag baat hain, Bhatije ko yahan jamana hain .Bina gaali, unki baatein khali (The Opposition has no political and development agenda in their speeches. All they can do is abuse me. One can’t run a country by hurling abuses),” PM Modi had said at a rally in Serampore on April 29.

Addressing a rally at Purulia Banerjee said ” When Modi comes to Bengal and said that I am a top extorsionist, and party is “Tolabbaz’I wanted to give him a tight slap of democracy .”

Prime Minister took a jibe at Chief Minister of West Bengal and claimed a day after in a rally at Purulia that her slap will be a blessing for him.

Lashing out further at Banerjee on Tuesday, the BJP president Amit Shan said, “Control your anger didi and it will help you reduce the blood pressure.”

Shah had made the mockery when reporters asked him how many seats BJP might win in Bengal and he said that they will win 23 seats from Bengal and “that’s why didi is not letting us to hold rallies and venting out her anger against us by using filthy language.”

While addressing an election rally at Canning on Monday, he stated, “We will restore the glory of Bengal. Mamata Banerjee has turned sonar (golden) Bangla into kangal (pauper) Bangla.” This incident, however, attracted a thunderous comment from TMC leader Derek O’Brien when the former quiz champion called Shah “pukeworthy” under the #Low Life.

Banerjee also, at a rally in Canning on Tuesday,  said “Amit Shah should be made to squat holding his ears for his Kangal Bangla comment.”

On Monday, Bahujan Samaj Party leader Mayawati held a press conference and took a dig at PM Modi over the Alwar gang rape case and said, “BJP’s women legislators are afraid when the PM meets their husbands. They feel that their husbands will leave them just as Modi did to his wife.”

However, later Union Defence Minister Nirmala Sitharaman convened a press conference and said “Absolutely shocking and disappointing to see Mayawati commenting on PM Modi’s personal life and the lives of BJP women leaders. I want to tell her, all of us are very happy in our party and have very good professional relations in the party,”

In various rallies, West Bengal Chief Minister Banerjee claimed that when PM Modi went to submit his affidavit, the officer asked him about her wife’s details and he remained silent.

After Modi claimed in an interview to Akshay Kumar that Didi sends kurtas and sweets, Mamata Banerjee escalated her attack and said that people on the state will now offer him “sweets made of soil” and fill it will pebbles instead of votes.

Even Banerjee said that she will count every single vote that goes to the BJP in this election.

After Tuesday’s violence  which led to ruckus at Vidyasagar college in North Kolkata,  Prime Minister Modi said at a rally on Wednesday at Taki (under Basirhat Lok Sabha constituency) that “Mamata Banerjee wants to strangulate democracy as she is in power. She has said that she will avenge every inch of space that she loses to BJP and she has fulfilled her agenda within 24 hours.”

Political analysts, however, are of the opinion that as politicians do not want to solve the deep-rooted problems in society like unemployment , industrial growth,  they are banging on personal attacks and using filthy language. While a section of political analysts feel that the  extent of personal attack by  political parties traded against each other has resulted in sharp polarisation which will lead BJP and edge to maximise their vote share.

Samir Kumar Das, a senior professor of Political Science at the University of Calcutta (CU), said” The politicians are using the filthy language to score points over each other which is not desirable in a Parliamentary democracy.  If you use filthy language, the  response is even filthier so that one can score another point. So there is no end in the slide. This election has surpassed all the previous elections in terms of use of filthy language.”

Maidul Islam, a senior political analyst associated with Centre for Studies in Social Science, said “The BJP is trying to bell the Opposition with the same weapon and so both the ruling and the Opposition parties are using filthy languages and making personal attacks. This will eventually lead to sharp polarisation within people and that will help BJP to maximise their vote share.”