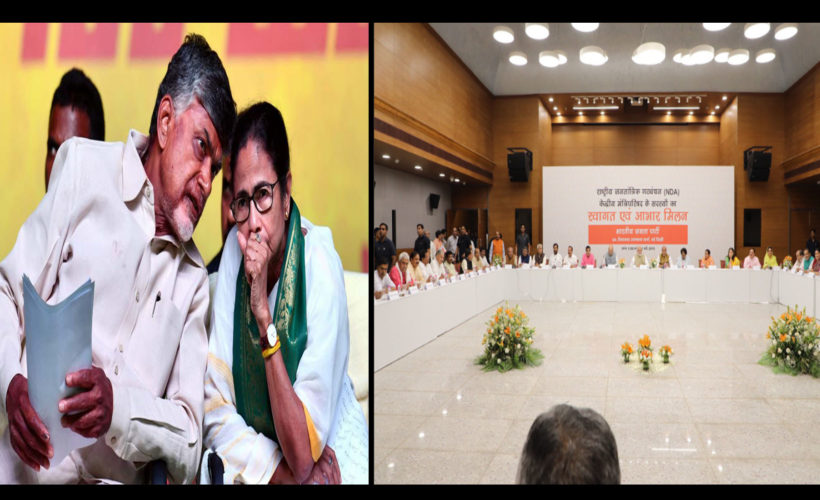 Kolkata : Despite the exit poll result claiming a comprehensive NDA victory in the just-concluded 2019 Lok Sabha polls, while the Opposition parties are trying to put up a brave face and cobble up a powerful anti-BJP alliance, BJP also decided to carry on their regular party activities.

Andhra Pradesh Chief Minister Chandrababu  Naidu on Monday met his West Bengal counter part, Mamata Banerjee, at the latter’s residence in Kalighat, of Kolkata. The meeting lasted 45 minutes. However, both the leaders avoided meeting the media.

UPA chairperson has already decided to convene a meeting on May 23 with all non-NDA parties.

On the other hand, BJP national president Amit Shah will host a dinner with its alliance partner on Tuesday at New Delhi. Prime Minister Narendra Modi is also scheduled to be present at the dinner party also. A meeting is also scheduled at the BJP office before the dinner. Until now, Shiv Sena chief Uddhav Thackery and Bihar Chief Minister Nitish Kumar is expected to be present at the meeting.

Significantly, Banerjee and Naidu’s silence has sparked a controversy among the Opposition parties which claimed that the anti-BJP parties were shocked to see the exit poll results and they do not have anything to say.

Dilip Ghosh, BJP president of West Bengal, mockingly said, “Despite TMC’s haughtiness, BJP will win 23 seats in Bengal. The anti-BJP parties are shocked to see the exit poll results. After May 23, the anti-BJP alliance will not have any work.”

Sources in the TMC said  the two leaders on Monday discussed the possibilities of forming a non-BJP government with the support of the Congress and other regional parties. The duo decided not to convene any press conference without consent of other leaders of the Mahagathbandhan . A detailed meeting will be chalked out after the election results are declared on May 23.”

After the exit poll results were declared on May 19, Banerjee tweeted: “I don’t trust the exit poll gossip. The game plan is to manipulate or replace thousands of EVMs through this gossip. I appeal to all the Opposition parties to be united, strong and bold. We will fight this battle together.”

It may be mentioned that several exit poll results have predicted  a tally of NDA ranging from 287-365 seats in the 543 member Lok Sabha. The exit poll  results also predicted that the Congress will not even cross the 100 mark. In West Bengal, a majority of the exit poll results predicted  that TMC will win a maximum  of 24 seats, BJP 16 seats, Congress two seats and Left Front zero seats.