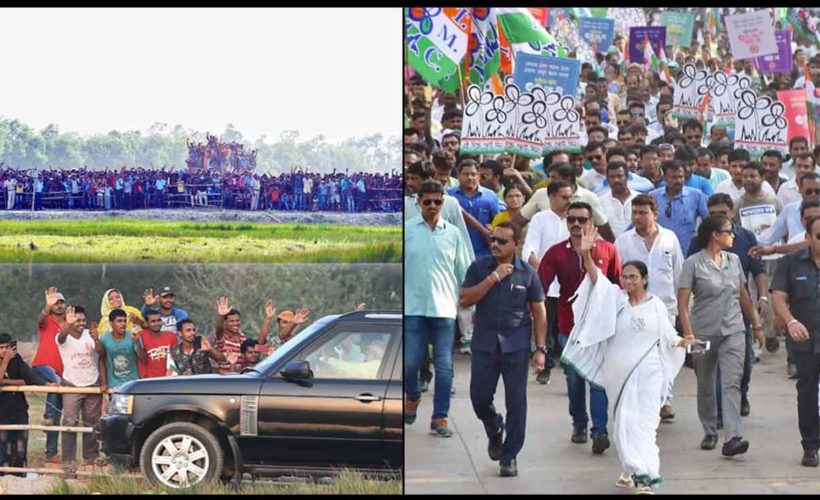 Kolkata : In what you may say as getting a taste of your own medicine, the chit fund issue — that the BJP often reminds the people about the Trinamool Congress (TMC) — has reached the door of the saffron party.

The West Bengal Chief Minister and TMC chief, Mamata Banerjee, on Thursday said the land that Prime Minister Narendra Modi used for his rally at Mathurapur belongs to a chit fund owner .

Banerjee said she has asked the police to investigate the case and bring the culprit to book after elections.

Showing ‘documents’ to the crowd at the rally in Mathurapur, she said, “I have got all evidence that the man who allowed his land to be used for Modi rally is actually an owner of a micro-financing company which is running an illegal business. They (BJP) talk of Saradha , Narada chit fund scams and target us, but what are they doing here? The police will take action after the elections.”

Maidul Islam, a senior political analyst with Center for Studies, said,” The chit fund issue has been brought by Trinamool Congress to counter BJP at a time when BJP is attacking TMC over Saradha and Narada scam . As BJP is trying to enter TMC core citadel in the last phase polls, TMC is leaving no stone unturned to counter BJP. On Thursday while Modi criticised Banerjee by claiming that her party is responsible for vandalism of Vidyasagar statue recently at Kolkata, he did not use the Sarada , Narada scam to counter Mamata in Thursday’s rally.”

It may be mentioned that PM Modi has conducted around 17 rallies in West Bengal and almost in all the rallies he touched the issue of Narada and Saradha chit fund scam and accused TMC of being involved in the scam .

Thursday’s slugfest between CM Banerjee and PM Modi was a sequel to the episode over vandalism at Vidysagar college in North Kolkata during the BJP president Amit Shah’s road show. Modi had also said at Mathurapur rally that the CCTV footage of the entire act should be brought out so that the guilty are punished. He also questioned how can our supporters enter inside when the gate was locked?

The PM said that he will set up a statue of Vidyasagar at the same spot with panchaloh (five metals).

However, Banerjee said at a rally in Diamond Harbour, “We can set up a statue of Vidyasagar . No need for BJP’s money to rebuild the statue. She further said that “Modi Babu can rebuild a statue but can’t he restore a 200-year-old heritage.”

Modi also claimed confidently that they will cross 300 seat mark in the ongoing Lok Sabha elections and that the people of Bengal will play a significant role in helping the party achieve the target.

In both the rallies at Taki in Basirhat Lok Sabha constituency on Wednesday as well as a rally at Dum Dum on Thursday Modi said,” The surveys that have been done after the fifth and sixth phase of polling across country shows that BJP will get an absolute majority and looking at the overwhelming support from the people of Bengal during my rally I can say Bengal will take us even further and help us cross the 300 seat mark this time.”

Imankalyan Lahiri a senior political analyst and professor of International Relations (IR) said “The last phase will be a tough fight between TMC and BJP as the later is trying to enter Trinamool Congress bastion and TMC will try to retain their seats and so allegations and counter allegations is bound to increase in the last phase polls.”