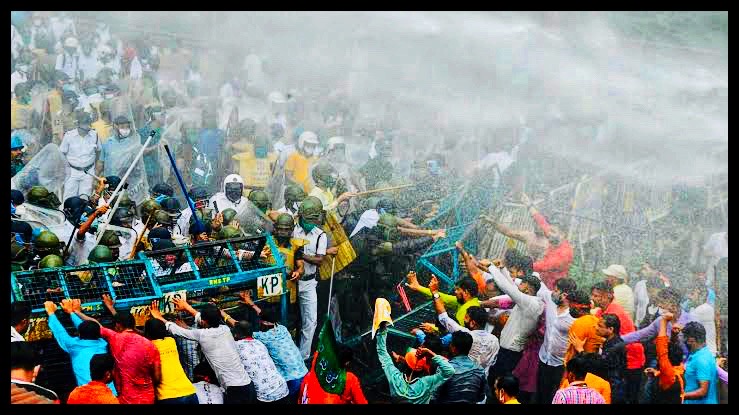 KOLKATA 8 OCT: BJP Yuva Morcha’s Nabanna Abhiyan turned into a battlefield  on Thursday as police and BJP supporters clashed on Thursday . When the police resorted to lathi-charge to quell the mob, BJP leaders  hurled stones and also tried to resist them . The clash resulted in mass scale violence in the state.

The protest turned violent at GT Road, Howrah Maidan. It took this turn when police resorted to lathi-charge and lobbed tear gas on the BJP supporters who were heading towards Nabanna. Police were seen to be beating up the protestors and using water canons to break up the gathering. Thick black pungent fumes from the discarded burnt tyres that were set ablaze by the protestors choked the atmosphere and streets were filled with stones.

Thousands of BJP youth workers marched from Kolkata and Howrah towards Nabanna around 12:30 pm shouting slogans.

Sources in the state BJP said that police resorted to indiscriminate lathicharge. They maintained that they were carrying on a non-violent rally. They were stopped at the Mallick Gate that left the supporters angry and led to an attack on the police with stones. Soon after the police saw the barricades being pulled down, they resorted to bursting teargas shells. Meanwhile, the Howrah police also seized a fire arm from a BJP worker identified as Balbinder Singh. The worker was detained near Mallick Fatak.

In an attempt to control the growing rage from the protestors, personnel of Rapid Action Force (RAF) baton-charged the crowds of BJP workers. This resulted in injuring several protestors including Raju Banerjee and MP Jyotirmoy Singh Mahato, Arvind Menon and more.

The BYM had organised the rally in protest against alleged lack of employment opportunities in Bengal, deteriorating law and order problem in the state and irregularities in the TET and WBCS examination.

Dilip Ghosh, state BJP president, however, admitted that the fire-arm belonged to a BJP leader. “It was a licensed gun and the person has papers for it. The arrested person, Balbinder Singh is one of Arjun Singh’s body guards,” said Ghosh.

According to Ghosh, Banerjee knew very well that she could not stop the rally so she has planned to close Nabanna today. He further said that the police acted in a barbaric way. “Around 700 people were injured as a result of the clash between police and TMC leaders. Many of them have been hospitalised. Some senior BJP leaders like Arvind Menon, Raju Banerjee have been hospitalised after they received injuries. More than 100 people have been arrested by both Kolkata Police and Howrah Police,” added Ghosh.

Tejasvi Surya, BJP Yuva Morcha national president, BJP and Bengaluru South MP has called it a black day today as democracy and constitutional rule of law were murdered by the Mamata Banerjee government. He expressed that West Bengal has turned into one of India’s most corrupt government. He reiterated that was one of the exact causes of taking out this protest rally.

Surya said, “Bengal is the land of Swami Vivekananda and we will bring the lost heritage to Bengal. We are confident of throwing the TMC government. And bringing BJP government in Bengal in the upcoming Assembly election.”

In his first meeting with the press, after the protest rally Surya said his main aim is to overthrow the Mamata government. He mentioned that the BJP is confident of winning the Assembly election and form the government in Bengal.

Surya also questioned the state government about what prompted the police to throw coloured water on the protestors. “It is unethical to use colour water in the first place. Why were the BJP supporters splashed with colour water. We demand an enquiry by the Central government,” added Surya.

When reporters asked Alapan Bandhyopadhyay about the use of colour water, he said, “It is herbal colour used during Holi and it has been purposefully used to identify the protestors.” He also added that several police officers were injured too. Badhyopadhyay further said that although there were provocations from the political party who organised the rally, police did exercise restraint.

Reporters were quick to raise questions on why the police gave permission to organise such a TMC rally. The state chief secretary Alapan Bandhyopadhyay, said, “The applicant last evening had mentioned several rallies and said, each rally will have around 25,000 youth. If each rally had to be allowed then that would have been a travesty as per the lockdown norms. On the other hand, the rally organised by other applicant was less in number compared to the one put in by BJP.”

It may be mentioned here that Mamata Banerjee was at Bhabani Bhavan today to speak with the police and check the protest movement.

Furthermore, Firhad Hakim, Mayor and TMC leader, said, “BJP is a terrorist party and instead of peaceful protest they tried to resort to violence in order to de-stablise Bengal”.

According to the TMC leaders, when TMC was in the Opposition, they had also conducted various protest movements. Several leaders claimed that they never had taken any pistol or carried crude bombs to use against the police even back then. Notably, TMC leader Miss Mamata Banerjee had herself faced police beatings, but she never used pistol to disperse the police.

Earlier, the Mamata-led TMC government had on Wednesday clearly declined any permission to carry out such protest march. The state government had cited the Pandemic Act as the main reason. It had also announced that the state secretariat would be closed for the next two days starting from October 8 for ‘cleaning and sanitisation’ purposes. The state government cited Supreme Court’s order to BYJM in reference to the blockade against Citizenship Amendment Act(CAA) at South Delhi’s Shaheen Bagh. It mentioned the right to protest in public places cannot be occupied indefinitely. The state government’s instructions also cited the prohibition of large gatherings as the per the latest Central government guideline on National Disaster Management Act on COVID-19 pandemic.

However, BJP leaders claim that Chief Minister Mamata Banerjee closed the Nabanna for sanitisation to stop them from protesting but, Trinamool Congress had also organised a protest rally in South Kolkata against the Hathras incident. And maintained that no one stopped them from protesting.