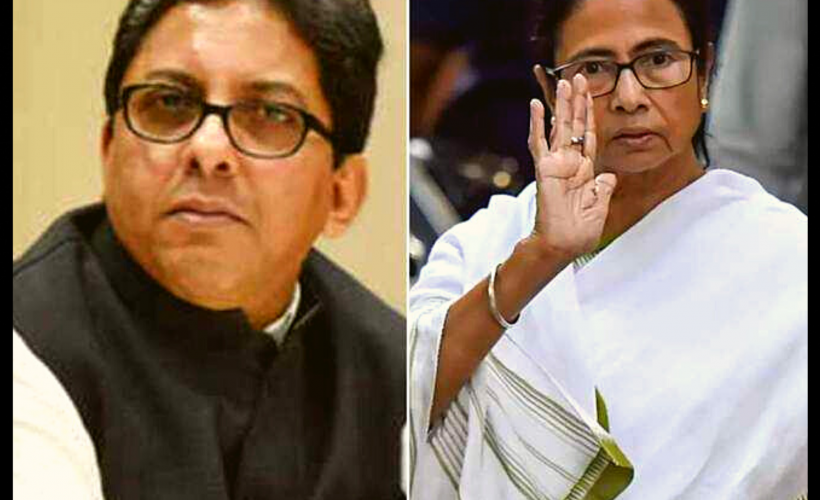 KOLKATA MAY 31: The face-off between the Centre and the state over the continuation of services of chief secretary Alapan Bandhyopadhyay took a new turn as today the superannuation of Bandhyopadhyay was accepted by the state government and chief minister Mamata Banerjee appointed him as the chief advisor.

On Monday, chief minister Mamata Banerjee wrote a letter to Prime Minister Narendra Modi, urging him to reconsider the order issued by the Central government to chief secretary to report to DOPT on May 31, hours after the chief minister along with the chief secretary skipped the whole review meeting to assess the damages in the the aftermath of Cyclone Yaas.

In her letter, Banerjee mentioned that she was “shocked” and “stunned” by the “unilateral” and “unconstitutional” order” to recall Alapan Bandyopadhyay to the Centre. The recall order, Banerjee said, came as a “bolt from the blue” and has been taken with “mala fide intention.” and “hot haste.”

Despite the Centre’s letter of recalling Alapan Bandyopadhyay, the the state government, in their letter, refused to release Bandhyopadhyay and the chief minister conveyed the objection to the Center in the letter sent to PM on Monday. On Monday evening, chief minister Mamata Banerjee said that she had just received a letter from the Centre asking Bandyopadhyay to report to DOPT on June 1.

Meanwhile, Banerjee also held a press conference on Monday and blamed the Central government for their utter disrespect for the bureaucrats.

Banerjee said, “Just because they do not like me, they are putting pressure on a senior IAS officer. I have already written a letter to the Prime Minister asking him the reason for the recall of the officer, but he has not yet replied on the matter.”

According to senior retired bureaucrats, the matter may not end here, and the Centre may take action. But Bandhyopadhyay can challenge in court

if at all Centre takes any cognizance against him as he has already superannuated from service.

Basudeb Banerjee, former chief secretary of West Bengal, said, “After superannuation, there is no possibility that the Centre might take any action against the senior officer without consultation of the state government. Although the Centre appoints a senior IAS officer, he is under state cadre. If any action is to be taken against the officer, the Centre must take permission from the state government. If all the actions have been violated, then the officer can move CAT or Supreme Court.”

Moreover, Mamata believes that there is a less chance of attaching Alapan Bandhyopadhyay’s provident fund, gratuity, and other benefits in this

case, despite solid resentment by the Centre. And if the situation still arises, undoubtedly Bandyopadhyay will have an edge in any legal battle as he is retired from the services.

Bureaucrats claimed that the issue has now turned out into a battle between Centre and state government over influencing IAS and IPS officers.

Senior bureaucrats said that although the Centre wants to prove that it being the appointing authority of civil service officers, it has the final say on their career, but rules mentioned that they need to please consult with the concerned state government for any action they want to take.

In December 2020, following an attack on the convoy of BJP national president JP Nadda in South 24 Pargana district the Centre had recalled three IPS officers to Delhi, but the state refused to release they and they are still working with the state government.

Alapan Bandopadhyay is a 1987-batch IAS officer supposed to report to duty at Delhi on Monday morning. He was set to retire today (May 31) but was recently granted a three-month extension by the Union government on the CM’s request.

On Friday, Banerjee, along with the Chief Secretary, skipped a review meeting chaired by the PM at Kailaikunda. The Chief Minister was reportedly unhappy with the presence of the Leader of Opposition and BJP MLA, Suvendu Adhikari, and Governor Jagdeep Dhankhar at the meeting, which she claims should have been a PM-CM meeting only. After making the PM wait for 30 minutes, Banerjee arrived at the meeting venue and met the PM one-on-one in a 15-minute appointment. She handed over a preliminary report on the damages due to cyclone Yaas.

The incident created a political row in the state, with the BJP calling Mamata Banerjee’s move a “violation of protocols” and a “disrespect of the Constitution.”

Initially, the Chief Minister had said she was not fully aware of the PM’s schedule and had her own meeting and aerial surveys in place, denying the presence of Suvenudu Adhikari – her aide turned bête noire – at the meeting as a cause of displeasure.

On Monday, though, Banerjee practically admitted that Adhikari’s presence was a cause. In the letter to the PM, she detailed her version of events where she mentioned re-scheduling everything “rush to Kalaikunda.” She alleged that the “structure” of the meeting was revised to “include a local MLA” (referring to Suvendu Adhikari, who is the MLA from Nandigram) who had “no locus to be present in the PM-CM meeting”. No objection was raised to the presence of the Governor Jagdeep Dhankhar, who had no role to play in the meeting, the CM wrote.

“….But I am refraining from commenting further in this regard as a the gesture of etiquette and courtesy, but an individual MLA having no locus attending the meeting was unacceptable,” she further said, adding that the Chief Secretary had written and sent messages to officials accompanying the PM to “get this issue sorted out or to arrange a meeting between PM and CM before the meeting.”

“Despite a series of messages, we got no positive result or response,” she mentioned in her letter.