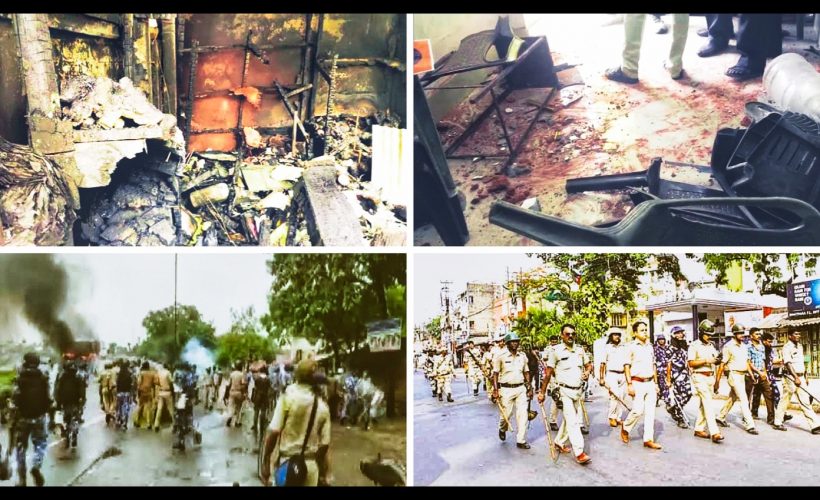 KOLKATA MAY 4: With the post-poll, violence continues to remain unabated in the state with at least 14 people killed in the last 48 hours after the massive victory of Trinamool Congress, PM Narendra Modi called Governor and enquired about the incident.

While BJP leaders claimed that several shops and residences allegedly vandalised by TMC workers in Gopal Nagar area of South 24 Parganas, and in several districts.

BJP party president JP Nadda came to Kolkata on Tuesday, and he will visit the house of those victims who have been killed after the polls.

JP Nadda said, “I have been informed that as TMC goons first identified the people who voted BJP and murdered them. They have vandalised their house too. I am going to South 24 Pargana today to meet with the victims family members and ensure full co-operation from Center.”

Shefali Das, a resident of Gopalnagar in South 24 Parganas, said, “On May 2, TMC goons attacked my home as my husband was BJP’s polling agent. They even threatened us to sell our property & leave this place,”

The BJP has attacked the Mamata Banerjee-led Trinamool Congress over the alleged killing of its party workers in Bengal, and charged that the state is burning due to state-sponsored violence.

The party workers were allegedly killed in a clash that broke out between the TMC and the BJP in Bengal’s Purba Bardhaman district after the poll results were declared.

Comparing the TMC with Nazis, the BJP dubbed the government in West Bengal as fascist.

BJP president JP Nadda is expected to go on a two-day visit to the state. He will meet the families of the party workers hit by the violence.

According to chief minister Mamata Banerjee, BJP is creating many fake videos and making them go viral. The images of the videos are not from Bengal.

Later in the day Kolkata Police confirmed that the videos that were posted were fake videos and the videos are from Orissa.

Meanwhile, Mamata Banerjee appealed for peace and calm in the state and blamed the BJP for the violence.

“Bengal is a peace-loving place,” CM Banerjee, who won a third term with a stupendous victory, said on Monday.

“During the elections, there has been some heat and dust. The BJP did a lot of torture, also the CRPF. But, I appeal to all for maintaining peace and calm. Don’t indulge in violence. If there is a dispute, inform the police. They must manage the law and order situations,” Banerjee added.