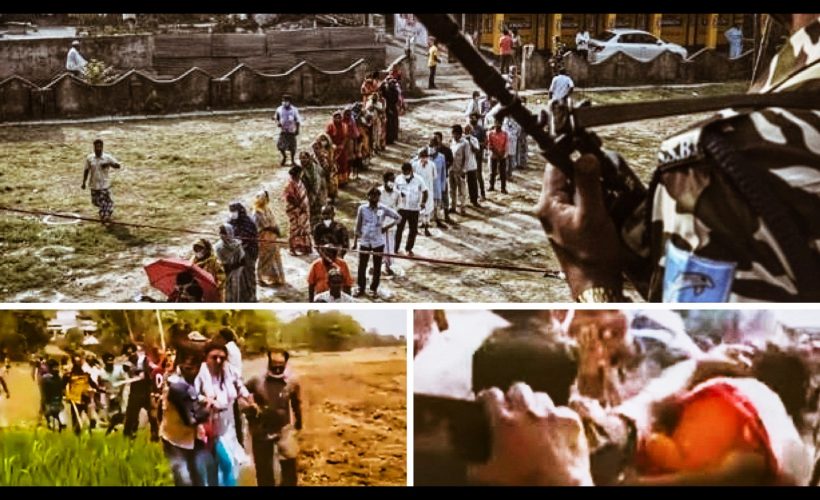 KOLKATA 6 APRIL: Unabated violence continues to mar Bengal elections as it claims three people and left several people injured. Including, a TMC candidate Sujata Mondal Kha at Arambag in the third phase of elections in 32 constituencies.

Allegations of booth capturing, injuring several candidates of both, the ruling party and the Opposition parties were observed throughout the day on Tuesday.

Even, Papiya Adhikari, BJP candidate of Uluberia received injuries allegedly by TMC supporters. This was when he was on his way to pay a visit to one of the BJP workers at a nearby hospital.

Sources in the state government said that violence was witnessed all throughout the day in parts of Hooghly, South 24 Parganas, and Howrah.

Moreover, Electronic Vending Machines and VVPAT machines were also found at the residence of the TMC leader in Uluberia. The Election Commission (EC) has suspended the sector officer Tapan Sarkar who was in charge of the EVMs and the reserved machine has been removed from the election process.

Mamata Banerjee addressed a public rally in Alipurduar district, said, “Sujata Mondal, TMC candidate of Arambagh was chased and hit on the head near a polling booth by saffron party workers. They (BJP) have inflicted serious injury on our Scheduled Caste candidate Sujata when she visited a booth. They also hit another candidate in Khanakul. Even BJP workers did not allow Soukat Mollah TMC  candidate from Canning to enter the booth.”

According to Election Commission, nearly 78 per cent of polling was recorded till 5 pm in all the 31 Assembly constituencies in this third phase. Voting was conducted in 16 Assembly constituencies in South 24 Parganas (part II), seven in Howrah (part I), and eight in Hooghly (part I). In fact, Hooghly recorded the highest voting at 79.29 per cent followed by Howrah 77.92 per cent, and South 24 Parganas 76.74 per cent.

While the BJP has mounted its colossal psychological pressure on Trinamool Congress, the TMC has actually donned the role of an Opposition party by complaining to the Election Commission. Mainly, about the malpractices that is being indulged by both the BJP and the CRPF in every polling booth.

After the second phase polls, where Mamata contested from Nandigram, BJP mounted its psychological pressure on the Trinamool Congress. The saffron party even claimed that they have already emerged victorious in the Bengal Assembly election.

On Tuesday, Prime Minister Narendra Modi, said, “Didi, O Didi, Aap Har chuke hain. (Banerjee, you have lost the election). This is evident from her speech and the nervousness shown by her party workers. It is true that Didi (Mamata Banerjee) has lost her Muslim vote bank and she is admitting it in public. If I would have consolidated the Hindu votes like this, then the EC will send me a letter where they would want an explanation on why I have done the same,” added Modi.

According to Modi,if she would have accused that Hindus have come together to vote for BJP, then he would have alleged polarisation and brought the roof down. But what is she doing now?

Modi added, “You are asking a community to block votes for your party. Didi asked me how could I possibly know that the BJP has won in Bengal. Do we have supernatural powers like the Almighty? No need to drag in the Gods and Goddesses. The enthusiastic crowd tells us that we have won in Bengal.”

It may be worth mentioning that only a week ago, Modi had instructed all the District Magistrates and Superintendents to provide him with a list of all the farmers, in a rally. This was mainly said with an aim to provide the PM Kissan Samman Niddhi because they are coming on May 2 to form the government.

Significantly, the TMC’s Khela Hobe theme song seems to have drawn in a huge following for the ruling party. It has created psychological pressure on the BJP.

Even, TMC chief Mamata Banerjee has also announced that she is winning from the Nandigram seat in various rallies.

In a veiled attack on TMC MP, Abhishek Banerjee, Prime Minister Narendra Modi on Tuesday criticised Chief Minister Mamata Banerjee for starting ‘Bhaipo Service Tax’ (Nephew Service Tax) in West Bengal. It claimed that her call for ‘united Muslims’ clearly shows that even the minority does not trust her now.

PM Hits out at Mamata in Rally: Didi is Heaping Abuses on Me

Hitting out at West Bengal Chief Minister Mamata Banerjee, Prime Minister Narendra Modi on Tuesday claimed that the TMC supremo was ‘heaping abuse’ on him as she is ‘frustrated’ over the party’s impending defeat in the Assembly elections.

Addressing a public meeting at Dumurjala in Howrah, he claimed that people in Bengal are speculating that the TMC will disintegrate after its defeat on May 2. It is the day scheduled for the counting of votes. “Didi is heaping abuses on me as she is frustrated over her impending defeat,” he said.

Maintaining that the TMC dispensation has only institutionalised an ‘ease of crime and ease of loot’, the prime minister said that a BJP government, instead, will provide the people the ‘ease of living and business’.