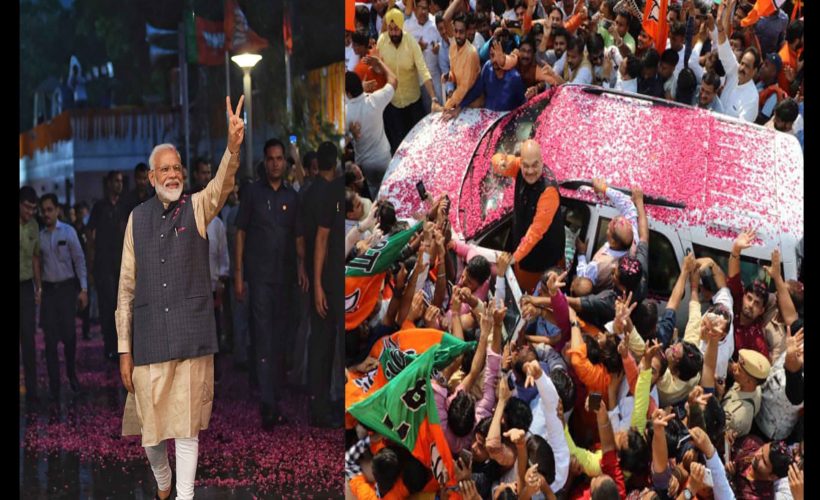 Kolkata : Chief Minister of West Bengal Miss Mamata Banerjee talked of giving a “tight slap of democracy” to Prime Minister Narendra Modi , but irony is she herself got the “slap of democracy” from the people of West Bengal as BJP gave her party a run for its money, bagging 18 seats from Bengal.  As per the counting, TMC won  22 seats, Congress  won  two seats Malda South and Behrampore in Bengal. One of the biggest features of the election was absolute abysmal performance of the Left which drew a blank in the Left ruled West Bengal for 34 years. After eight years of holding in power , the green fort is breached by saffron storm . From 34 seats in 2014 , Trinamool Congress won 22 seats.

Adhir Chowdhury, who stuck to Behrampore even when he was West Bengal Pradesh Congress(WBPC) president, is one of the Congress candidate who won from the state. In Behrampore although TMC supremo has appointed observer Suvendu Adhikary to defeat him at all cost he has managed to take the lead . Abu Hasem Khan Chowdhury of Gani Khan family has won from Malda south defeating a political novish from BJP Sreerupa Mitra.

Significantly, in India, Modi came back to power with a thumping majority for two consecutive terms .

BJP president Amit Shah said, “Despite so much violence, the BJP won 18 seats in West Bengal. It tells that in coming days BJP will establish its might in West Bengal.”

BJP surpassed its own performance of 2014 by snagging  more than 350 seats alone compared to 282 seats  in 2014. However, West Bengal Chief Minister Mamata put up a brave front and tweeted that “Congratulations to the winners, and all losers are not losers.”

Surprisingly, it was rural belt  especially that gave her the jolt , as places like  Bankura, Purulia, Jalpaiguri , Midnapore, Alipurduar , Jalpaiguri that chose BJP over TMC. The biggest set-back for Mamata is Darjeeling as BJP candidate Raju Bista won and the defeat for TMC augurs ill for the Binoy Tamang faction of GJMM and also the future of GTA.

Political observers feel that this win for BJP can once again stoke the flames for the demand for separate Gorkhaland.

The biggest  setback for Banerjee  is the defeat of veteran leader Subrata Mukerjee of Bankura, by a political greenhorn Dr Subhas Sarkar.

Mukherjee was a political mentor of Banerjee. Mukrerjee is a 10-term MLA, three-term minister and one-term Calcutta Mayor.  He joined the TMC and became a trusted lietenant of Banerjee.

Not only this, the BJP also won four Assembly bypolls. In Darjeeling , Bhatapara and Habibpur (Malda) Assembly by-polls, the BJP won. The TMC won the  Assembly bypoll in the region at Islampur in North Dinajpur from Congress in 2009, Nowda and Ulubera East.

Mimi Chakraborty from Jadavpur won with more than 2 lakh votes .

Mahua Moitra from Krishnanagar won with a margin of 65,909 votes.

Maidul Islam, a senior political analyst of Centre for Studies, said, “The way BJP has surged in Bengal and move into a double digit tally. It will create a trouble for Banerjee . If she does not rectify the mistakes, the TMC is likely to face daunting challenges in the Assembly elections too which will be held in 2021”

Dilip Ghosh , West Bengal BJP president, said: “People could not vote during state panchyat election. There has been wide-scale violence pertaining to Panchayat election and we feel that this time people voted for BJP. The Opposition parties have claimed malfunctioning of the EVM and they have also raised questions regarding the credibility of Central forces who were deployed during the elections. People have gave a befitiing reply regarding Banerjee ‘s arrogance.”